The Fabric Workshop and Museum 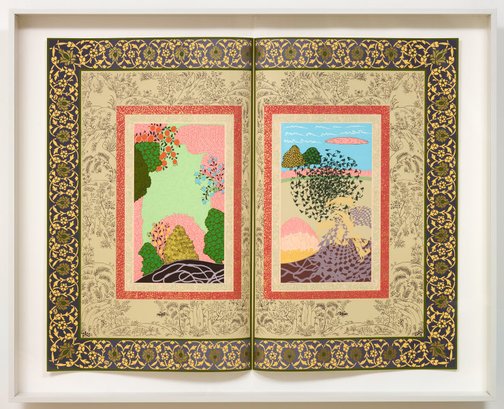 Born 1969 in Lahore, Pakistan, Shahzia Sikander is an acclaimed younger painter who lives in New York City. She has exhibited widely, including with her own show which was on at the MCA in Sydney from November 2007 to February 2008. Sikander was schooled in the miniature painting tradition of Pakistan, and combines the historic iconography and technique with her own aesthetics. 'The illustrated page' is one of two works created by the artist during a residency with the Fabric Workshop and Museum, Philadelphia. The work takes the form of two extraordinarily large 'pages' presented side by side, like an open book, in a single frame. The artist plays around both with the format and size of traditional Persian miniature painting, as well as with her own idiosyncratic form of abstraction which involves in her words, 'the extraction of details', whereby she gradually removes the figures and narrative elements that would be found in traditional miniatures. The cluster of deers on the right page relates to a 'composite' deer with four bodies found in the collection of the Indian Museum, Calcutta.

The Fabric Workshop and Museum