The particular combination of 'munjado' and 'chaekkori' seen in this vibrant folk screen was painted only in Kangwon Province in northern Korea. The screen, which is unusual in its inclusion of bird and flower motifs amongst the scholarly paraphernalia depicted in the lower sections of the panels, is typical of works done by the itinerant, self-taught artists who travelled from town to town. It is a good example of a regional Korean application of the skills of the calligrapher's brush.

The top of each panel features the Chinese characters for each of the eight Confucian virtues, with certain strokes of each ideograph substituted with a symbolic animal, bird, plant or fish related to that virtue. Confucian values were regarded as the cornerstones of Korean society and 'munjado' paintings representing them were used as daily reminders to observe loyalty, trust, benevolence, commitment, honesty, humility and finial respect.

The bottom of each panel depicts a variety of scholar's books and utensils ('chaekkori'). Within the strict Confucian society of the Choson dynasty (1392-1910), scholars were highly respected and 'chaekkori' screens were typically displayed behind the desk in a man's study to convey an air of dignity, luxury and a reverence for scholarship.

ink and colour on paper 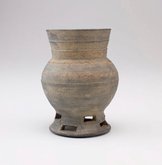