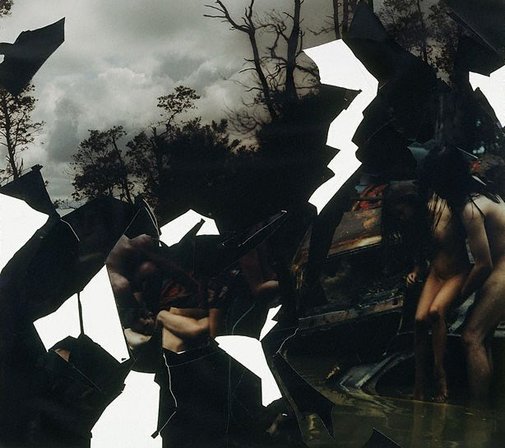 Bill Henson's first solo exhibition, held at the National Gallery of Victoria in 1975 when he was 19 years old, heralded the beginnings of a unique photographic vision of the Australian landscape. Known for his brooding imagery and exacting artistic process, Henson alludes to the darkness of Caravaggio, the lightness of Purcell and the drama of Wagner. The intensity and intimacy of his images broach the boundary of the painterly and the cinematic, combining both surface and depth to reflect a space between the mystical and the real. Like Francesco Clemente, his photographs may begin with a fleeting vision or impression, a piece of music or line of writing, that echoes subconsciously before manifesting in his work.

Henson's 'Untitled 1994/95' shows naked youths, cars and the darkened landscape that constantly fluctuates between space and time. It is a layered work, interspersed and fragmented by jagged reversed photographic paper that is pinned almost savagely to the surface. The glaring voids are not only temporarily blinding but create a shift akin to a screen obscuring the darkness and its content. The fracturing of the surface develops a provocative tension, splintering the image and adding to its intensity, further charging the displaced subjects with a brutal, baroque sensuality. The figural 'tableau vivant' is, as critic John Forbes suggested, an approximation of Renaissance art. There is also something medieval about the imagery and figures, which recall the rich and fractured spaces of Dieric Bouts' 'Hell' and 'Paradise' of 1450.