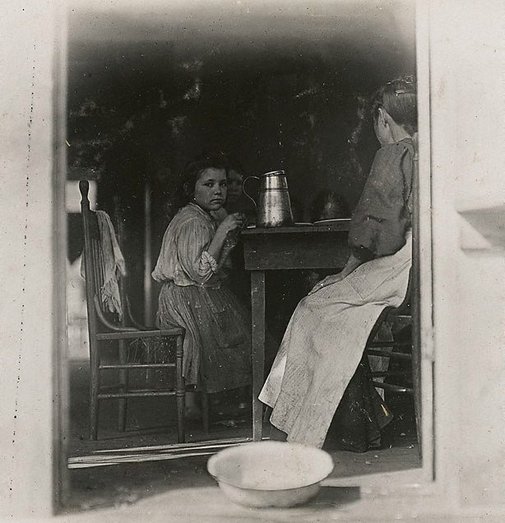 Tifton, GA Jan 1909. A family working in the Tifton Cotton Mill. Mrs A J Young works in mill and at home. Nell (oldest girl) alternates in mill with mother. Mammy (next girl) runs 2 sides. Mary (next) runs 1 ½ sides. Elic (oldest boy) works regularly. Eddie (next girl) helps in mill, sticks on bobbins. Four smallest children not working yet. The mother said she earns $4.50 a week and all the children earn $4.50 a week. Husband died and left her with 11 children. 2 of them went off and got married. The family left the farm 2 years ago to work in the mill. January 22, 1909. (National Child Labor Committee caption card)

'Dinnertime. Family of Mrs A J Young Tifton, GA' is from a vast survey Hine undertook between 1908 and 1918 for the National Child Labor Committee (NCLC) in which he investigated the working and living conditions of children across America. His combination of ‘straight’ photographic technique and information-rich captions enabled the succinct illumination of the human cost associated with exploitative employment practices. At the time his findings achieved massive circulation in newspapers, not only raising public awareness, but in his words: ‘My child-labour photographs have already set the authorities to work to see “if such things can be possible”. They try to get around them by crying “Fake” but therein lies the value of the data and a witness. My “sociological horizon” broadens hourly.’1