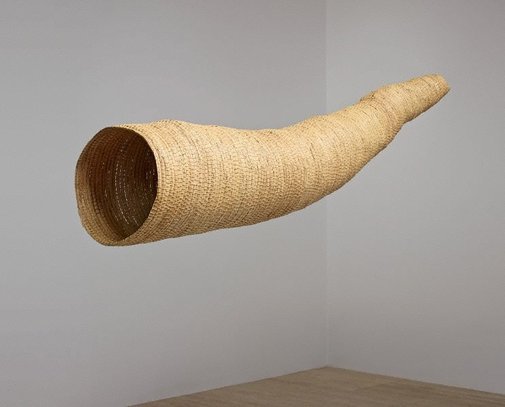 Yvonne Koolmatrie has lived all her life in Ngarrindjeri country, which ranges from the Coorong, a wetland wilderness at the mouth of the Murray River, upstream to the present day farming communities of the lower Murray Riverland. Koolmatrie grew up in the Riverland and experienced the hardship of seasonal work that became the only means of survival when Aboriginal people were denied access to their traditional lands. Throughout her youth, Koolmatrie saw little evidence of the cultural practices of her ancestors that have become her life's work.

Koolmatrie began to practise the weaving technique and gradually to experiment with form, extending the range of objects she had studied in the South Australian Museum '... to put my story in my weaving'. For Koolmatrie, the near loss of the Ngarrindjeri weaving tradition crystallised a twofold responsibility: to pass on her skills and to create work of the highest possible standards so that her fibre forms will endure for future generations.

Koolmatrie views it as her obligation to retain and refine this technique and to pass the skills she has learnt on to others. She runs workshops throughout South Australia and interstate and she is represented in major collections. Koolmatrie's innovative interpretations of traditional forms have appeared in numerous exhibitions, including her representation in the Australian exhibition, 'fluent', at the 1997 Venice Biennale.

Browse other works by Yvonne Koolmatrie