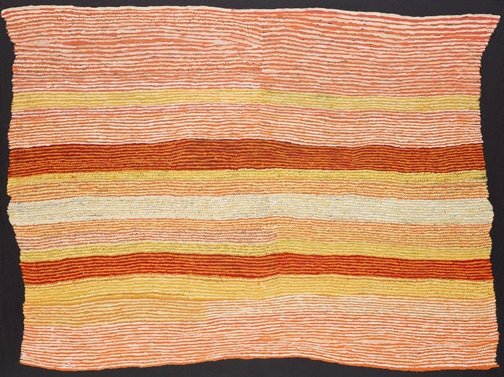 Kunmanara (Ray) Ken spent his childhood in Pukutja (formally known as Ernabella Mission), a small community approximately 330 km south west of Mparntwe (Alice Springs). As a young man he worked as a stockman and ringer at the surrounding cattle stations. He later relocated to the small community of Amata, approximately 380 kilometres south of Mparntwe (Alice Springs).

Amata and its surrounding homelands are represented by Tjala Arts. This Aboriginal-owned and managed corporation was established by the women of Amata as Minymaku Arts (Ladies Arts) in 1997, but was renamed in 2006 to reflect the increased involvement of men in the centre. Tjala Arts not only provides the opportunity for Anangu Pitjantjatjara people to develop skills in fine arts, but also plays significant role in the well-being of the community and the maintenance of culture.

Prior to joining Tjala Arts in mid 2003, Ken had not painted for the market. Until his death in 2018, he was considered one of the leading artists working at Tjala Arts and was actively inspiring younger generations of Anangu men to become involved with the art centre.