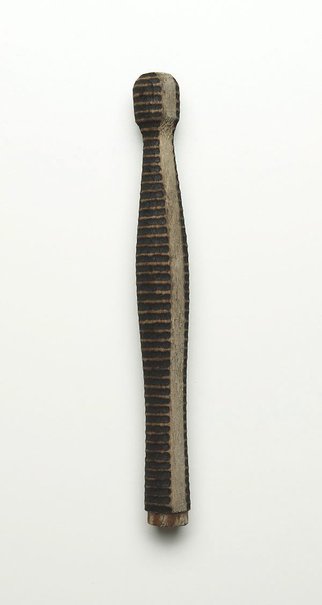 Since the 1970s British artist Roger Ackling has created distinctive meditations on landscape from used cardboard or wood discarded on the shores of beaches, river banks or on the outskirts of towns. Nails, screws and hinges reveal there was once a purpose to these bits and pieces, but their function has been abstracted by exposure to the environment and later by Ackling’s involvement. He draws on the surface of the wood, typically at the place where it was found, in blocks of even, parallel lines similar to corduroy. Using the heat of the sun’s rays amplified through a small hand-held magnifying glass he carefully burns the lines. Drawing from left to right with the sun over his shoulder, he works tangentially with elements from the world around him – driftwood, light and fire – to trace a record of the time it took to create each work.

Each interaction of sunlight and wood is unique, the scorched patterns of lines drawn in response to the timber’s inherent qualities, blemishes and shape. Intuitively engaging with his materials, Ackling’s engraving channels a life source into the objects, as if to infuse them with a renewed dynamism. Ackling has said: ‘it is light passing through space which enlivens these objects’.1 Like British artists Hamish Fulton and Richard Long, whose art developed from their long walks to remote areas around the world in the late 1960s, Ackling uses conceptual repetition in a way that paradoxically imparts individualism; from single tall strips of wood to square assemblages and long cylinders, the specificity of each piece is intensified by the act of marking.

For Ackling the process of drawing with the sun at a particular location, during a specific day and season is as important as the final appearance of the object. Evidently the work is produced outdoors and in response to the position of the sun, its heat and intensity. Conceptually, it fuses materiality and immateriality; physical existence with the ethereal heat of the sun. Each piece is intrinsically of the place from which it came or where it was drawn, which frequently includes the beaches of Norfolk and Weybourne in England and of other countries such as Japan. In this way Ackling’s works chart a poetic and transmuting experience of landscape, acting as a conduit for our phenomeno-logical engagement with this world.

Browse other works by Roger Ackling