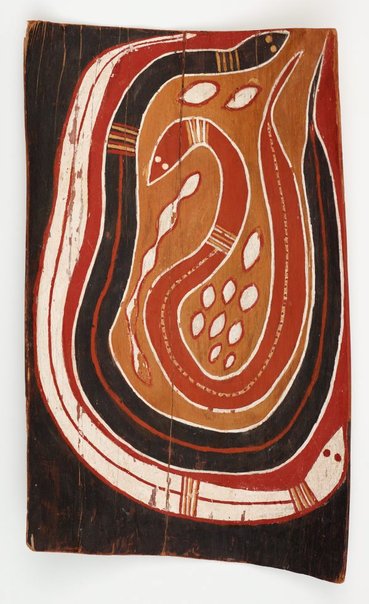 Tom Djawa was a senior leader of the Gupapuyngu clan and one of the main artists working at Milingimbi in the 1950s when Reverend Edgar Wells was the mission superintendent. Wells actively encourage the men in the community to paint and supported their efforts by operating an art centre below the mission house, where he would collect works for distribution to the Methodist overseas mission shops located in various state capitals.

In 'Mundukul' 1950, Djäwa captures three yellow-bellied pythons, the Yirritja snakes known as Mundukul and connected to water. At Milingimbi Mundukul is associated with the Macassan Well, a source of living water surrounded by extensive shell middens. The name of the well reflects the long-held connections in the area with Macassan trepangers from Sulawesi, who visited the area for several centuries until the early 20th century; however, the well was used by local people before the arrival of these visitors. As Djäwa recalled, ‘The Macassan Well belongs to the Yirritja moiety. It was made by a snake, called Mundukul. He came flashing lightning, from Worral.’

Browse other works by Tom Djawa