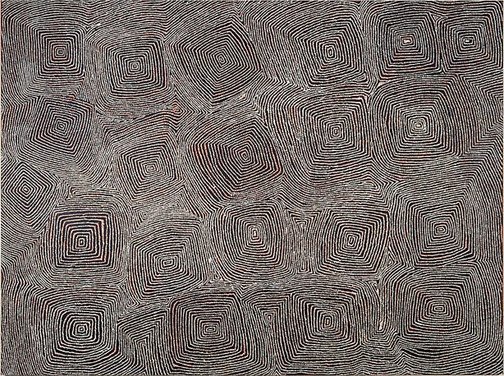 George Ward Tjungurrayi is now a prominent Papunya Tula artist and the painting 'Untitled (Kutungka Napanangka)' 2003 won the 2004 Wynne Prize for landscape painting at the Art Gallery of New South Wales. Recent paintings by Tjungurrayi reflect the trend towards spectacular flamboyant compositions. George Ward Tjungurrayi paints in his own adaptation of the Tingari style. Deceptively delicate lines of loosely-joined dots create networks or webs over the entire surface of the canvas. This gives his paintings a distinct energy that contributes to the dynamism inherent in the composition. Multi-layered representations of country such as this painting reflect the central concerns of the Papunya Tula artists.

Documentation from Papunya Tula Artists states:
"This painting depicts the mythological journeys of Kutungka Napanangka, an old woman who passed through a series of sites west of the Kintore Community. During her travels towards the east she stopped at the rockhole site of Tjinalka, where she gathered a variety of seeds that can be ground into a paste and then cooked in the coals to form a type of unleavened bread. Later she continued travelling towards the east eventually reaching Muruntji near Mount Liebig. At Muruntji she was accosted by one of a group of boys so she chased them and caught all but the culprit who managed to escape. She killed the others and cooked them in a fire."