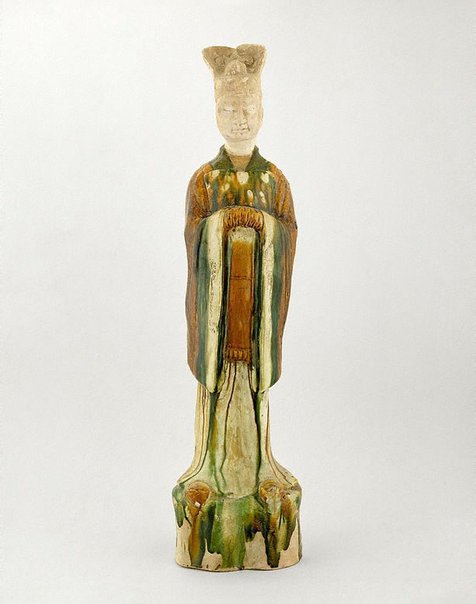 The official was an important Confucian development. The concept of the official obtaining his distinguished position through birth had disappeared in the Qin dynasty after which appointment was made through education and examination. The official class formed a highly complex civil service from Han times on. "The official view of the official is described thus in an edict of 144 BCE: 'now the officials are the teachers of the people. It is proper that their carriages and quadriges, their clothes and robes should correspond to their dignity' " (E. Capon and W. MacQuitty, 'Princes of Jade', London, Cardinal, 1973, p64).

The officials were the favoured elite, educated in the classics, virtuous, worthy and held in highest regard as representatives of the Emperor. They formed a hierarchy distinct from the aristocracy. In the Han period we know the officials' robes consisted of full gowns of fine silk of voluminous sleeves, an ornate hat appropriate to his rank, and a belt of leather often clasped with a rich belt-hook of bronze, possibly inlaid with gold, silver or turquoise.

This figure attired with the customary robes of a civil dignitary and with a "monk's cap" type of head-dress stands, arms folded in front of his chest, on a pedestal.

Tall, severe figures such as this are classic tomb figure types. Their exact significance is still uncertain for as Ayers remarks in 'The Seligman Collection of Oriental Art' (Vol.2, London, Lund Humphries, p.41), "Dignitary figures of this type have been found in numerous important tombs where they occur in pairs, each member of the pair representing a different racial type and wearing a distinctive head-dress and shoes". They are considered, on the one hand, to represent men, perhaps ministers who held positions of responsibility in their day and who would have been a common feature at the Tang court; and, on the other hand, personages in popular Chinese mythology, such as, for example, a representative from the spirit world.

These pieces have vent holes in their pedestal bases and were fired upright in the kiln. The face, head and head-dress are unglazed.