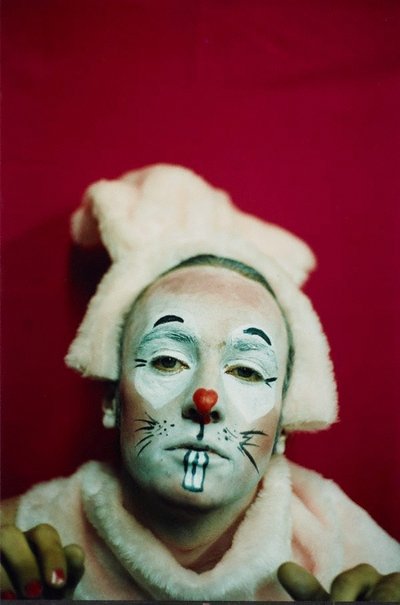 Justene Williams’s early photographs and installations from the 1990s engaged with the mundane and everyday. They included stark realist shots of suburban places and people, and blurred, painterly shots, often the result of using the limited technology of cheap disposable cameras and the developing facilities of one-hour photo labs. As part of her process she allowed for photographic mistakes, making the transformations – the distortions, uneven light and bad focus – a strong and continuing theme. Her reflection: ‘There is no such thing as a bad picture’, typified her approach (Michael L ed 1997, ‘Photography is dead! Long live photography!’, Museum of Contemporary Art, Sydney p 36).

Williams has talked of her enjoyment of poring over photos, saying: ‘the less accurate or more amateur the camera, the better in a way.’ (Palmer D 2006, ‘Eye spy with my little eye – a gift from Justene Williams’, ‘+ plus factors’, Australian Centre for Contemporary Art, Melbourne p 58). In ‘Eye spy with my little eye’ 2006, she shared her obsession with these processes by distributing or ‘gifting’ books of her images as part of a public event, with one effect being their prompting for consideration ‘what we spend our time looking at and why’ (Palmer D ibid p 59).

‘Bunny boy 5’ and ‘13’ are from a series of 13 unique photographs of a man, made-up, partly costumed and performing for the camera. Alternately mock and serious, his masculinity is in uneasy relationship to his attire. He appears, in his soft pink ears, painted face and nails and with arms crossed, to exude a resigned pathos, sadly self-aware in his half-dressed state of the complexities of identity and its sometimes problematic processes of construction, negotiation and performance. In its symbolism the bunny costume is often associated with a highly sexualised objectification of femininity, however here the signs are less clear. Bunny boy’s makeshift costume and vulnerable pose highlights an uncertain embrace of identity. His obvious ambivalence, particularly between a seemingly dumb acceptance and considered intention is strongly engaging; a dynamic which also marks the wider processes of Williams’s work in more recent times.