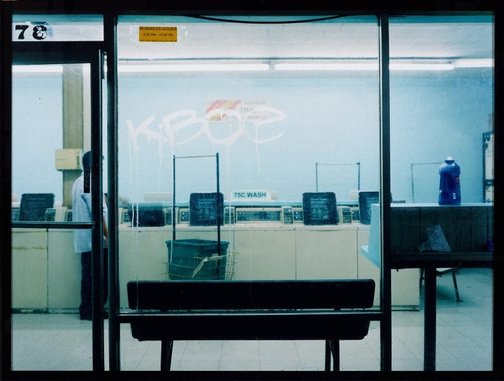 Christina Fernandez graduated MFA from the California Institute of the Arts, Valencia in 1996. She is currently chair of the department of photography at Cerritos College in Norwalk, CA and is represented in the touring exhibition ‘Phantom sightings: art after the Chicano movement’ which began at LACMA 2008, as well as ‘This side of paradise: body and language in LA photography’, Huntingdon Library, San Marino 2008 (also touring). Her work is held in numerous public and private mainly) Californian collections.

Fernandez’s various works examine the intersection between private and public space, personal and historical narratives, urban and city spaces and the cultural border and historical relationships between the US and Latin America. Her works often utilize text or other methods of narration in which the more-than-personal narrative is of primary importance. The work is informed by the long tradition of documentary photographers in the US (from Dorothea Lange to Allan Sekula), taking hidden labour as its subject matter.

Fernandez pictures the urban landscape of Los Angeles and the work and domestic life of its inhabitants in the Latino neighbourhoods of east L.A. In ‘Lavanderia’ 2002, she used very long exposures, photographing storefronts at night. Scenes of domestic labour are both scrutinized and blurred by the aperture of the camera. The etched and graffiti-marked windows are an obstacle to the photographer’s perfect view. Fernandez claims that the images are ‘rich with binaries – working and waiting, the beautiful but oppressive…’Lavenderia’ is less about connection than about our inability to bridge the spaces between subject and artist’. [Pomona College Museum of Art 2003]

Browse other works by Christina Fernandez