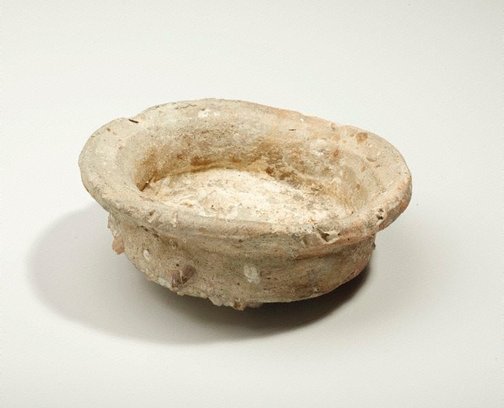 The ancient Oc Eo of the Mekong Valley in Southern Vietnam was a highly advanced culture, with an extensive canal system, buildings with brick foundations, and trade relations with other ancient civilisations like Rome, India, and China. In documents written around the 3rd century by agents of the Chinese Emperor Wu, Oc Eo is described as having walled palaces and a sophisticated system of taxation in place.

Pottery is among the varied Oc Eo artefacts that have been discovered since 1944, when the French archaeologist, Louis Malleret began excavations in the region. Round-bottomed bowls such as the above example were called creuset or crucible by Malleret. The stamped grooves that mark the base of these pots suggest that they were strong enough to withstand heating and were perhaps used for cooking or smelting materials such as glass. The barnacles at the bottom of the second bowl reveal that the pots were made of clay from local sources, mixed with various tempers including, sand, shells, and plant residues.