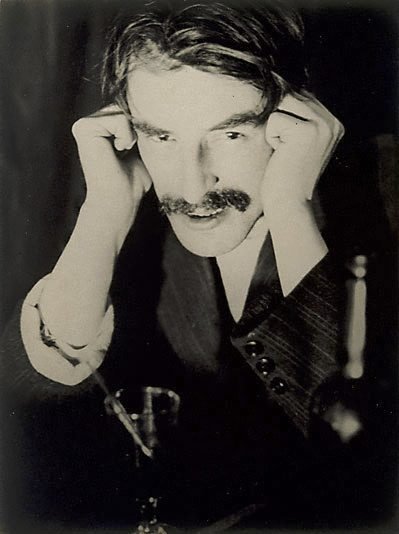 Paul Citroen was born to Dutch parents in Berlin in 1896, and studied art 1913-14. He became an apprentice bookseller, later establishing a successful art bookshop 'Sturm'. From 1918 he was active as a painter, and was associated with the Dada art movement. He also experimented with photomontage made from photographs and newspapers. From 1922-1935 Citroen studied painting and drawing with Johannes Itten and Georg Muche at the Staatliches Bauhaus at Weimar, and produced the well known film Metropolis in 1923. After he moved to Holland in 1929 he worked as a portrait photographer and freelance painter. In 1933 he founded and directed the Nieuwe Kunstchool in Amsterdam in partnership with Charles Roelofsz, which was developed with principles similar to those of the Bauhaus. As well as painting and lecturing in visual design, Citroen was involved in stage design for the Netherlands Opera.

'Charles Roelofsz' 1931 is a portrait which reflects the aesthetic and conceptual concerns that marked the Bauhaus photographic style. The subject, tightly framed and in a dark setting, is composed using the elemental formal principles resurrected by Bauhaus photographers. The model is apparently not posing, but looking into the camera in an intensely pensive state, yet as though in the middle of speaking. The silhouettes of a wine bottle and a glass propose an intimate and casual setting, but the direct lighting on the subject shows a careful construction. This is one of several portraits that Citroen made of Charles Roelofsz, his colleague and friend during his photography career. He also used Roelofsz as a sitter for numerous drawings.

This photograph is an excellent example of Citroen's portraiture and shows the dissemination of the Bauhaus style beyond Germany.