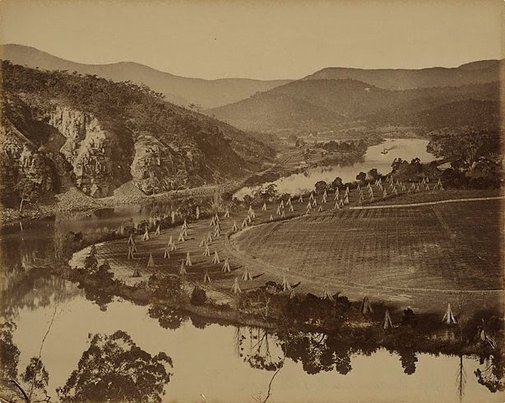 ‘I love the bush, and nothing gives me greater delight than to stand on the top of some high land and look out on a wild array of our grand mountains. I am struck dumb, but oh! my soul sings.’ John Beattie c1899 1

Born in Aberdeen, Scotland, John Watt Beattie was introduced to photography by his father. The family moved to Tasmania in 1878 and four years later Beattie began working in the studio of the Anson brothers in Hobart. By 1891 he had bought out the brothers, acquiring photographs by them and others which he was able to publish. He was elected a member of the Royal Society of Tasmania in 1890 and formed the historical and geographical section of the society in 1899. He was appointed Photographer of the Government of Tasmania in 1896 and operated a successful business in Hobart, eventually selling his collection in 1927 to the city of Launceston.

Beattie’s earliest years in Australia had been spent working his father’s farm at Mount Lloyd, near New Norfolk in Tasmania. The landscape of this region was well known to him and he photographed it on many occasions. It was the principal region for Tasmanian hop growing. This photograph of a hop plantation is taken after the harvest, with hop poles dug up and stacked in tent-shaped piles for use in the following year. The photograph was reproduced in the inaugural 1898 ‘Australian Photographic Journal Annual’ and a very similar work was included in the ‘Cyclopedia of Tasmania’ 1900, demonstrating Beattie’s popularity as a landscape photographer and propagandist for Tasmania.2 Beattie believed New Norfolk was a region in which ‘the conditions for good photography are best, calm days prevailing, and the river affording very fine reflections’.3

Browse other works by J.W. Beattie