Drowning theory, from the series Kermadec 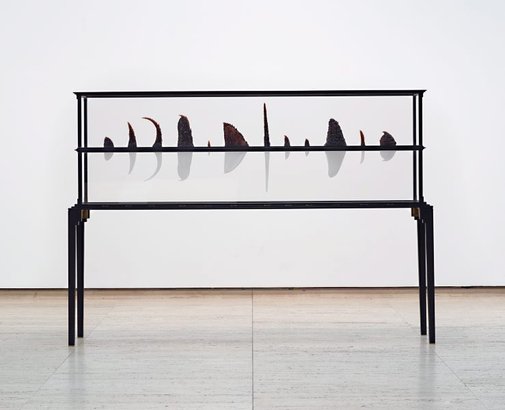 Fiona Hall's 'Drowning theory' 2011 is part of a body of work inspired by the artist's expedition to the Kermadec Trench, led by Pew Environmental Group in 2011. The Kermadec Trench is a 1,200 kilometre underwater channel of overlapping tectonic plates north-east of New Zealand, stretching toward Tonga. The site, a migratory path for important species of marine life and abound with mineral rich underwater vents, is regarded as one of the most geologically dynamic yet vulnerable environments on earth.

The title 'Drowning theory' 2011 is reference to the scientific hypothesis that New Zealand was completely submerged by water 23 million years ago. Hall has addressed this proposition by encasing 24 curiously corresponding objects inside a vitrine. On the top shelf stand 12 craggy pieces resembling geological formations. Below and upside down are 12 smooth items representing the beaks of endangered or extinct species of native birds, such as the kiwi, moa, huia, Haast's eagle and kakapo.

Hall's employing of a taxonomic system of classification and display creates a haunting memorial to the origin and demise of the natural world.