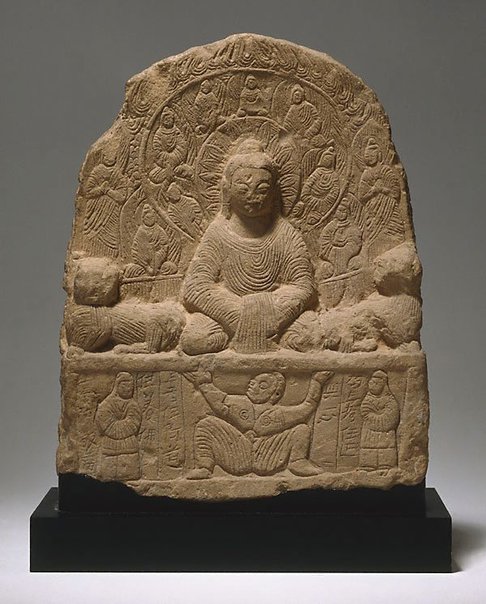 This stele is in an arched form with the Buddha seated upon a rectangular platform in the meditation posture. A pair of guardian lions stand on either side. The Buddha wears a garment, and its pleats are sharply defined with incised curved lines. A small halo of radiating petals behind the Buddha's head is encircled by a large halo enclosing six seated Buddhas backed by a flame nimbus. There are another two pairs of standing and seated Buddhas and Bodisattavas filling the spaces at the right and left. The top outer edge of the leaf-shaped slab is decorated with flame motifs rising to a pointed top. Below is a squatting dwarf who seems to be supporting the platform above his head with both hands. The figure is flanked by two small standing figures of donors on both sides. The inscription carved on the right reads: "for the deceased parents, Ren Zhenxing, whole-heartedly (in devotion of the Buddha)." The one on the left reads, "... Ren A'dao is in attendance of the Buddha ... (Characters illegible) ... respectfully ...". It is worthy of notice that the donors dress is in great contrast to that of others of later date. They wear a tight-sleeved short overcoat with trousers beneath which appears rather akin to the traditional dress of the Wei Tartars, the so-called 'Kuzhe'. It is known that, towards the end of the fifth century and the beginning of the sixth century, the early garments of the Buddhist figures introduced from India were gradually changed to become more like the costumes of the Chinese scholar-official. It is usually believed that this mode was adopted for images of the Buddhist sculptures coincident with an imperial decree of 486 which required that court officers wear the Chinese scholar-official robes.

The stele is a typical example of the early Northern Wei craftsmanship. The most notable feature of this stele is the multiple parallel lines defining the pleats of the figures' garments. The U-shaped folds over the Buddha's torso are arranged in a close series of concentric, round ridges. All these are the common features of the Buddhist sculptures in both bronze and stone made during the 5th century and which demonstrate the lingering influence of the Ghandhara style. The stele is a rare and good early example which reflects the early and provincial form of Budddhist sculpture in China.

Compare the work with a Maitreya stele dated to 472 in Chen Zhejin's collection, and a Buddha stele dated to 496 in the Shaanxi Provincial Museum Collection (both published in 'The Dated Chinese Buddhist sculptures' ed. by Jin Shen, Beijing: Wenwu Press, 1992, pls. 25 and 89). See also a number of bronze and gilt bronze images, many of which are dated to the 480's, 490's and the first years of the 6th century.