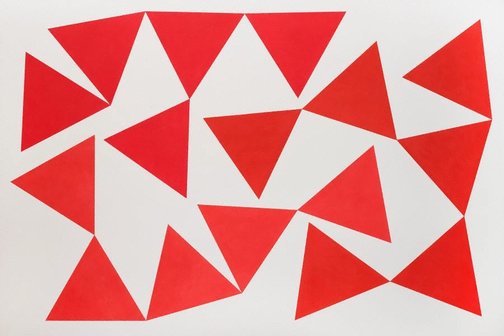 Helen Eager's work over four decades reveals an ongoing preoccupation with light and scale, characterised by simplified geometric forms and vibrant colour. She creates dynamic compositions of endless variation and infinite complexity, focussing on the triangle as a vehicle for her formal explorations.

'VIF' encapsulates her recent practice and stems from a series of works created over the past few years which feature chains of equilateral triangles on fields of white. The pictorial surface is animated by the interrelation of purposefully placed forms and the space that exists between them. As noted by Glenn Barkley (2012), the negative space - the ground between the shapes - is activated, becoming another shape just as important as the triangles themselves.

Despite its large scale, the painting invites an intimate engagement through subtle shifts in what otherwise appears to be monochromatic colour. These fine gradations of tone create the impression of delicate nuances of light. The painting's title 'VIF' is drawn from one of the many tubes of oil paint that the artist used to create the work, demonstrating the central importance of materiality within her practice. It emphasises the role of colour to Eager's work: its strength and its lively qualities.

Eager studied at the South Australian School of Art and began exhibiting her work in 1975, staging her first solo exhibition at Watters Gallery, Sydney in 1977. She received a Visual Arts Board travel grant in 1980, enabling her to travel through Europe and the USA, working in leading international print workshops and visiting major public galleries. In the late 1980s she graduated with a Masters degree from COFA. A residency at the Greene St Studio, New York, undertaking in 1988, formed a pivotal moment in the development of Eager's work: her earlier examination of interior subjects developed and shifted to a focus on abstract shapes. Her interior subjects became less about the objects themselves and more focussed on the forms that these objects were composed of. Light-filled surfaces translated into painterly fields, over time evolving into pure abstraction.

Browse other works by Helen Eager