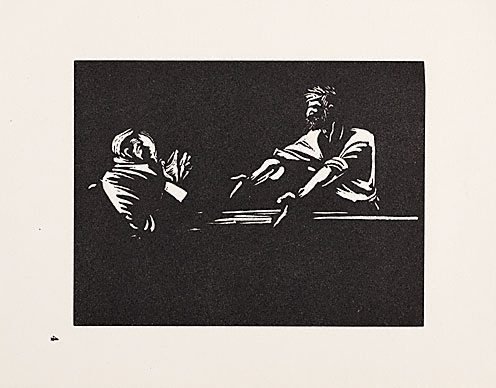 This portfolio was made in 1954 to commemorate the Centenary of the miners revolt at the Eureka Stockade, by the 'Melbourne Popular Art Group'. The text of the title page reads in part: "This is the centenary year of Eureka. In remembering this anniversary, we celebrate men standing together, in mateship, to defend their rights and liberties. We celebrate the birthday of Australian democracy".

The Eureka Stockade has variously been described as the birthplace of Australian democracy, republicanism and multiculturalism and was long emblematic for the Australian labour movement. Democratic and collective in spirit, the linocut portfolio reflected the value placed by the Social Realist artists of Melbourne on this historical event that over the years had become legend.

The images relate to text from various contemporary and historical sources referring to events of the Eureka Stockade. Some of the artists involved are remembered today - others not. For example, Ailsa O'Connor was an artist actively associated with the Social Realists and a member of the Communist Party (as was her husband Vic O'Connor). Noel Counihan, who made three of the linocuts in this portfolio, one of which also features on the cover in blue, is probably the best known and most important. The fiery commitment of artists to social realist causes in the 1940s (see for example the catalogues 'Angry Penguins and realist painting in Melbourne in the 1940s', South Bank Centre, 1988, and 'Art and social commitment, an end to the city of dreams 1931-1948', AGNSW, 1984) began to dissipate as the decade wore on, but its legacies remained.

The strong graphic aesthetic of these linocuts forcefully conveys the political and social themes of the subjects. The linocuts are as much a positive response to graphic tradition of European Expressionism as against a genteel Australian practice, best reflected in the nostalgic genre and landscape prints of the 1920s/30s etching revival.