from the series My ghost 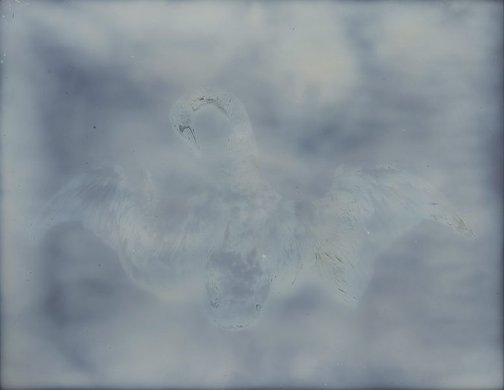 Adam Fuss is a distinguished international artist whose body of work is notable, not only for its continued concerns with themes of life, death and transcendence, but also for its utilisation of historical photographic methods such photograms and daguerreotypes. In Fuss’s case his daguerreotypes tend to be large.

Fuss has participated in numerous group exhibitions around the world including the Whitney Biennial (1991), Prospect Frankfurt (1989 & 1996), The Photography of Invention (1989) and In Camera (1993). Fuss has also had his work featured widely in solo exhibitions across America including the Modern Art Museum of Fort Worth (2006), Museum of Fine Arts, Boston (2002-2003), Fraenkel Gallery (2005), and Cheim Read Gallery (1999, 2003 & 2010). Important retrospectives of his work have been exhibited at the Fotomuseum Winterthur in 1999 and at Huis Marseille, Museum for photography, Amsterdam in 2011. Fuss' work is held in numerous private and public collections around the world, including the National Gallery of Victoria, Melbourne and the National Gallery of Australia, Canberra.

This image, from the series 'My Ghost', eloquently represents many of the artist's concerns. It is a daguerreotype (a complex first form of 19th century photography) of a swan. The use of the daguerreotype technique references the idea of a 'mirror with a memory' or, in a discursive sense, a presence through absence. The swan can be read historically as a mythical creature alluding to love and death: wings poignantly bent in suspension, floating like an apparition. It is a further extension of the artist's preoccupation with incorporating the natural world within his work. For example, other series (mainly photograms) have used rabbit entrails, smoke and spores. In this instance the subtle beauty of the image, with the swan hovering in a sea of soft blue hues and milky whites, resonates with a spiritual quality

Adam Fuss
from the series My ghost