Melbourne-born Violet Teague achieved recognition as a fashionable portrait painter in the early 1900s. In the 1890s she had studied in Brussels and London. During this time, a diverse range of artists across the tradition of the grand portrait style, including Titian, Velazquez and Gainsborough greatly inspired her, as did the great innovators of modern portraiture, including the Americans Sargent and Whistler.

Returning to Australia in 1895, Teague continued her studies at the National Gallery School and attended summer schools run by Emanuel Phillips Fox, an artist she maintained a close association with.

The subject matter of 'Margaret Alice' is significant. It is rare to find images of women in relation to sport from this period of Australian art. As Victoria Hammond has noted in relation to this work “This kind of image represents a landmark in the suffragists’ battle for women’s health and greater physical mobility; in the 1880s it was considered risqué for a woman to engage in strenuous physical exercise”1.

The artist Stella Bowen recalled the ordeal of playing tennis in her youth: “it took great courage to cross those immense lawns, hoping you would have enough petticoats (it was a crime to reveal you were a bi-ped above the hem-line, a difficult thing to conceal in the slanting Australian sunlight).”

'Margaret Alice' is one of the outstanding portraits in Teague’s oeuvre. The work is sumptuously rich in its ambience and elaborations of dress, fabric, textures and colours schemes.

Commonwealth exhibition of Australian art, Sydney, 1901, n.p.. In background of photograph of the selection and hanging committee

Browse other works by Violet Teague 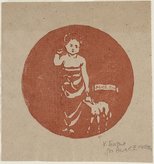