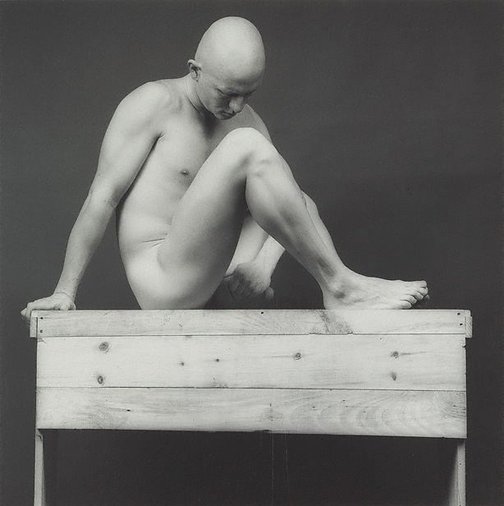 Robert Mapplethorpe’s early endeavour as a sculptor is evident in his photographs which delineate form, whether figures, still life or flowers, as classical representations. Even his controversial homoerotic constructs never waver in the precision of the classical technique, sculptural forms and detailed tonal variations that often use symmetry to accentuate the formal structure. He studied art at the Pratt Institute in Brooklyn and explored the appropriative practices of Andy Warhol and others, incorporating photographs into his paintings before exploring the relatively new medium of the Polaroid with the first of his self-portrait series. Always looking for the unexpected, Mapplethorpe’s interest in photographing the famous, body builders like Arnold Schwarzenegger, porn stars and the sadomasochistic subculture seemed a natural progression for an artist intrigued with the social diversity of his contemporary scene.

Mapplethorpe photographed a number of friends and models over several years including body builder Lisa Lyons, Ken Moody and Robert Sherman, influenced by the nudes of Edward Weston in the exquisite control of form and tone. Poised on what looks like a roughly hewn chopping block, ‘Robert’ becomes an object of display, the studio lighting differentiating the outline and surface of his body emerging from a shallow space defined by the dense background. Unlike many of his other nude studies that show the body perfect, with sculpted musculature, precise stances or in combination with props that emphasise the linearity and sexuality of the sitter, ‘Robert’ is instead a quiet and introspective image. His humanity is apparent in his inward gaze and the impression of his socks on his leg. Despite the contemplative scene, there is a tension present in the body as it arches slightly forward in order to see his genitals clothed in shadow. But this is not a conventional image, as Robert grasps his penis in a protective yet aggressive way, perhaps masturbating or symbolically referencing the contemporary issue of AIDS that gripped the American gay scene in the 1980s.

Browse other works by Robert Mapplethorpe