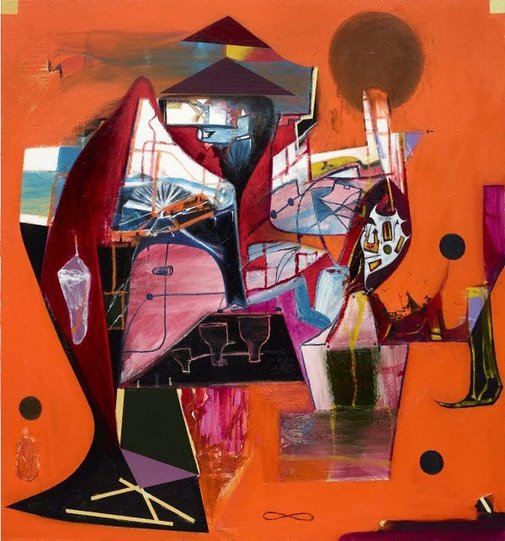 Gareth Sansom (1939 - ) is an eclectic senior figure in Australian art. His paintings and drawings present disparate ideas, visual references and techniques consumed from popular culture, religion, art history, literature, cinema, and experiences of the everyday. Sansom often takes breaks whilst working at night in his inner city studio to watch films, the content of which have begun to feed into the themes and imagery of his artworks. This eccentric practice is sometimes referenced in the their titles, for example 'Bill and Ted's Excellent Adventure' 2010, 'Revenge of the Nerds' 2010, 'Contempt (Luc Goddard)' 2012 and 'Psycho' 2013.

Sansom's 'The Seventh Seal' 2013 takes its title from Ingmar Bergman's iconic film of the same name. In The Seventh Seal (1957) a knight returns from the Crusades to discover his home of Sweden ravaged by the plague. He challenges the personification of death to a game of chess as a means of prolonging his life and searching for meaning. The artist first watched it at the Savoy cinema in Melbourne 1962, with fellow RMIT art students Robert Jacks and George Baldessin. The Seventh Seal (1957) had a profound effect on the young Sansom who had recently lost his father to a heart attack, and he has purported to have seen the film numerous times since.

'The Seventh Seal' 2013 features a stylistic mishmash of hard edge forms juxtaposed with flat fields of colour, and expressive and figurative gothic motifs. Centre right one can see the silhouette of Death with scythe, tombstones and crows. Below an infinity symbol has been included. The lurid orange background is presumably a nod to the 1940s works of one of Sansom's heroes, Francis Bacon. In nostalgically reconciling existential influences such as Bergman and Bacon Sansom irreverently mulls over of life, death, and conviction.

oil and enamel on linen

Browse other works by Gareth Sansom