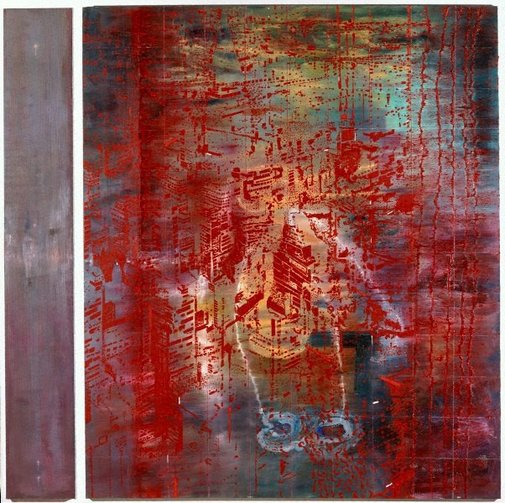 Jon Cattapan’s body of work since the early 1980s has drawn from his insightful reflections and observations on local disasters, accidents and life’s minor tragedies. His earlier paintings of church blazes, floods, riots and police raids that mapped a city’s ever-changing social landscape were layered with several viewpoints, stories and moments, often over several panels, reminiscent of a filmic montage. This compositional fragmentation and displacement, at times contrasted with layers of vast emptiness, reflects Cattapan’s own experiences of urban dislocation, as the son of migrant Italian parents.

His exploration of the discontinuous imagery of urban life and trevails was inspired by an altarpiece by Giorgione, ‘Castelfranco Madonna’ c1506, which portrays the Virgin Mary and child seated on a throne attended by Saints Francis and Liberalis, with the city of Castelfranco in the background.1 The method used by Renaissance painters of portraying multiple scenes and stories in one image, most often to show the Stations of the Cross or the many stories from the life of Christ, is used by Cattapan to transpose both place and time.

‘Skeletal’ epitomises the disrupted spaces in Cattapan’s art that shift between expressive and analytical imagery to present multiple layers of information. Utilising digital imaging, he often generates image after image to refine his representations of the city terrain. The hierarchy of marks in ‘Skeletal’ moves from a vast and expressive painterly base to digitally informed, vertical and horizontal striations that reveal the trace or skeleton of the city. His interest in surveillance techniques is intriguing given the code-like dots and dashes that give an illusion of space and depth; the red surface markings sit proud of the canvas in an evocative formation that recalls, yet clearly is not, something digital. These marks map not just the city but also the surface of the canvas into which is sandwiched the outline of a bird-man figure behind the city that appears to be drowning in the watery background.

The single narrow panel on the left that continues the background tones of the larger panel provides a moment of contemplation and meditation. Its thin, red, vertical striations, however, are not of the life and buzz of the urban pulse but are instead the signs of life, growth and ageing of a tree cut through vertically, like timber panelling. The work as a whole is an intriguing narrative: working from left to right and from depth to surface, the history and trace of the landscape is revealed – from the forests and rivers of nature, through to the digital, electronic, mechanical and built environment of our ever-growing urban environments.

Browse other works by Jon Cattapan