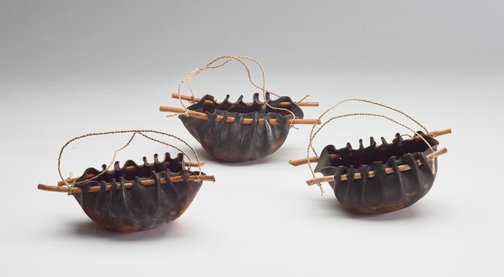 The sculptural works of Vicki West are testament to the tenacity of this community and the strength of their cultural inheritance. The formation of kelp into vessel forms is something that is unique to Tasmania. West first learnt these skills as a cultural workshop with elders and other members of the Aboriginal community and is now one of the most recognised artists working with this technique.

West’s 'Water Carriers' 2011 are made with bull kelp collected at specific locations on Tasmania’s east coast. To preserve the natural environment West will only use kelp that has been washed up onto the beach. She then moulds the kelp into the forms that reflect those made by her ancestors. As the kelp dries the translucency of the material is revealed.