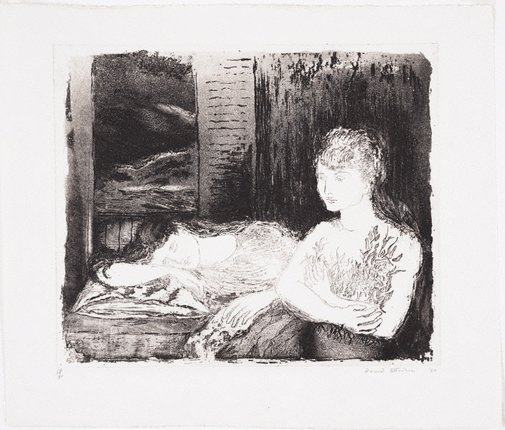 Born in England in 1919, David Strachan grew up in Victoria. His art training began at the Slade School, London 1936-38, where he became a life-long friend of Sydney painter Godfrey Miller. His summers were spent at La Grande Chaumiére in Paris. Strachan returned to Melbourne in 1938, took classes with George Bell (fellow students included Peter Purves Smith, Russell Drysdale, Sali Herman and Wolfgang Cardamatis, with whom he shared a studio in Melbourne and following his move to Sydney in 1941). He is now best remembered as a key member of the Sydney Group.

David Strachan lived in Paris between 1948 – 1953, where in June 1950, he had an etching press installed in his studio in the Rue de Chatillon. The following month he established the ‘Stramur Presse’ with his friend, a Dutch printer named Jacques Murray (a portrait of whom is in the collection), who is thought to have taught Strachan etching.

This print was made in 1950, before the major work Strachan produced at the Stramur Presse, ‘Accent and hazard’ was made, in 1951. It relates closely to a pen and ink drawing Strachan made earlier, purchased by the AGNSW from the Society of Artists Drawing exhibition at David Jones Art Gallery in May 1946 – it is possible he worked from another version of the drawing, or even a photograph, while in Paris.