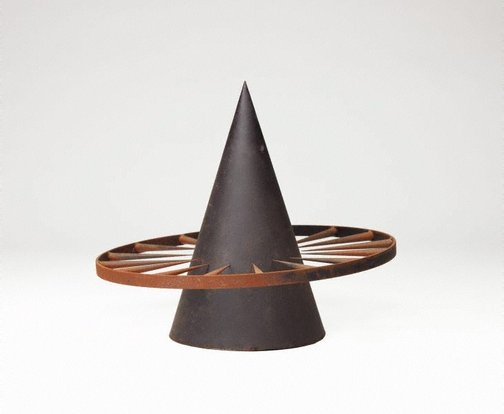 Ken Unsworth came to prominence as a sculptor in the 1970s, when he combined performance or body art with highly conceptual sculptural forms. Some of these performances, in particular ‘Five secular settings for sculpture as ritual’, involved using his own body as a kind of minimalist sculpture. In one, he posed spread-eagle on the wall, held aloft by a pole between his shoulder blades in a visual recreation of Richard Serra’s prop sculptures.

Unsworth was one of our most richly inventive sculptors during this period, combining the language of minimalism with a sensitivity towards often natural materials. 'Suspended Stone Circle II' in the Gallery’s collection is one of our most popular works and deservedly so as it combines the serial repetition of minimalism with the natural materials of land art and the sheer wonder of seeing stones so marvellously ordered and suspended in the exhibition space. As in all of Unsworth’s work, even his most reduced forms suggest an engagement with metaphysics and the human condition.

'Untitled' 1976 embodies many of the key themes in his practice during this time: balance, weightlessness and gravity, minimal forms and natural or traditional sculptural materials adapted to his vision. The maquette, a steel circle hovering around a central cone, addresses balance in its thrusting forms. The inventive exploration of form and materials creates a highly accomplished and satisfying sculpture. While small in scale, Unsworth’s vision during this time is immense.