This work won the Lady (Warwick) Fairfax Awward in 1981 and was acquired by the Gallery in 1981. 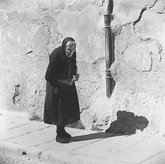