The devil made him do it 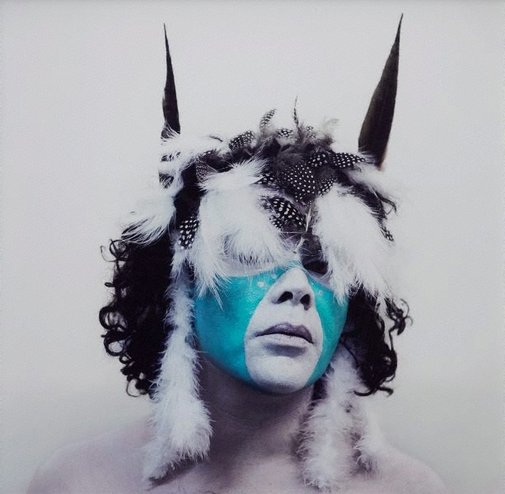 Christian Thompson is one of Australia's leading conceptual installation artists. Although his has worked nationally and internationally, he frequently returns to his country around Barcaldine, southwest Queensland. Thompson's work is primarily focused on the performative exploration of identity. In his works he morphs into a range of personas through carefully orchestrated poses, costuming and settings.

In 'The devil made him do it' from the series 'Native Instincts' 2011 Thompson plays with the impersonations of Indigenous people that are to be found within popular culture and are presented as an authentic image of Indigeneity. Within his guise, Thompson appears in full ceremonial regalia, with lurid blue face paint and a crown of feather adornment. Appearing almost clown-like, he ridicules these representations while questioning notions of authenticity and what this means in Aboriginal culture today.

The uncertainty of truth or implicit intention defines much of Thompson's practice, with his photographs emerging from a performative and experiential process which allows him the freedom to interrogate. Of course influencing this technique is the historic positioning of photography as scientific and anthropological support material. Thompson explores the complexities of Indigenous photography and participation, by placing himself in front of the camera and carefully orchestrated props and movements. As both photographer and subject he has absolute control.

Christian Thompson
The devil made him do it 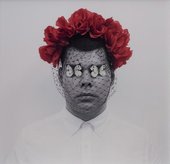