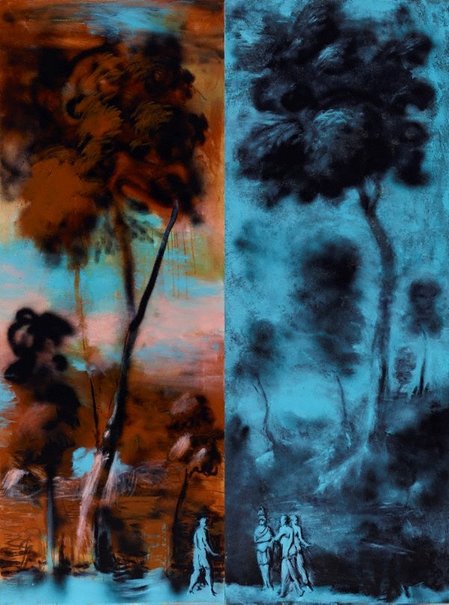 Since the early 1980s Tony Clark has worked with the conventions of landscape painting rather than in front of the landscape itself. Some of his first exhibited works were ‘sacro-idyllic’ landscapes in which classical temples sat amongst sketchily painted hills and trees, recalling the history of classical and neo-classical landscape painting in a deliberately modest but beguiling way.

The antecedents for Clark’s paintings have often been associated with the work of Nicholas Poussin and Claude Lorrain who in the 17th century visually tamed the landscape into a newly respectable genre of idyllic golden vistas. Clark does not attempt the high finish and structured composition of these artists, but rather works with the memory of what an idyllic landscape may be: groupings of trees, misty atmospheres and light, artfully placed rocky outcrops and occasionally figure groups in the foreground. These are familiar to all of us from repetition as conventions over the last three centuries.

While Clark’s work may at times seem critical of this legacy, it often still contains something of the Arcadian beauty of the originals and a genuine desire to evoke an imaginary landscape that calls on our shared visual memory. The potential tension between repetition, convention and original beauty is most apparent in ‘Sections from Clark’s Myriorama’, a project Clark has pursued since 1985. This series was inspired by John Clark’s 1824 parlour game – Clark’s Myriorama – in which a set of illustrated cards with a common horizon line could be interchanged to create almost endless versions of a landscape. In reviving this form Tony Clark has reiterated the original parlour game’s democratization of landscape composition as participatory play by creating many series of works which share the same title and a horizon line which means they can be arranged and rearranged as their owner sees fit, making their own ideal landscape.

Clark’s reduced palette of blue, rose pink, sienna and black in the left panel is typical of recent works in this series and further focuses our attention on form and atmospherics. The right panel has an even more reduced palette, now dark blue and black. The discipline of working without naturalistic colour means we can not view these as unmediated images of the natural world. Blue figures are outlined in black and hover in a shallow space in front of the landscapes. This painting is from his recent series, ‘Shakespeare’, and these figures are from Shakespeare’s ‘The Life of Timon of Athens’ in which Timon, the young general Alcibiades and his two prostitutes, Timandra and Phrynia, greet each other. In this work Clark layers painterly and literary references in his own distinctive way as he continues his exploration of the ‘shock of the old’.

Browse other works by Tony Clark