Portrait of the Malla King Bhupatindra and Malla Queen 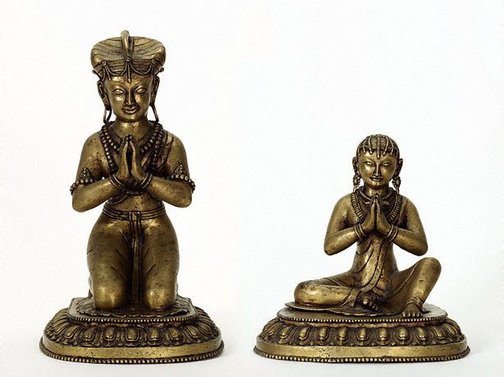 King Bhupatindra Malla ruled in Bhaktapur, one of the three major cities of Nepal, from about 1696 to 1722. Often referred to as the Nepalese equivalent of the Italian Medici Family, Bhupatindra is renowned for his prolific support of Nepalese art and architecture. Bhaktapur or "City of Devotees" lies about 14 km east of Kathmandu, Nepal's capital city, and is the jewel of Nepalese art and architecture. The city boasts of some of the finest temple structures and palace buildings, many located around the city square. As is characteristic for town squares in Nepal, a fine bronze sculpture of King Bhupatindra atop an imposing stone pillar stands in Bhaktapur's Durbar Square, across from the temple dedicated to the city's patron goddess, Taleju. This statue perhaps served as a model for royal portraits such as the above pair.

It is customary in Nepal for wealthy patrons to commission portrait sculptures and offer them to temples as a statement of their ardent devotion to the deity housed within. Given the relatively large sizes of the portrait sculptures of the king and queen and the excellent workmanship, it is likely that these figures would have been positioned outside the main shrine of an important temple, facing the shrine door and the deity within.

Portrait of the Malla King Bhupatindra and Malla Queen