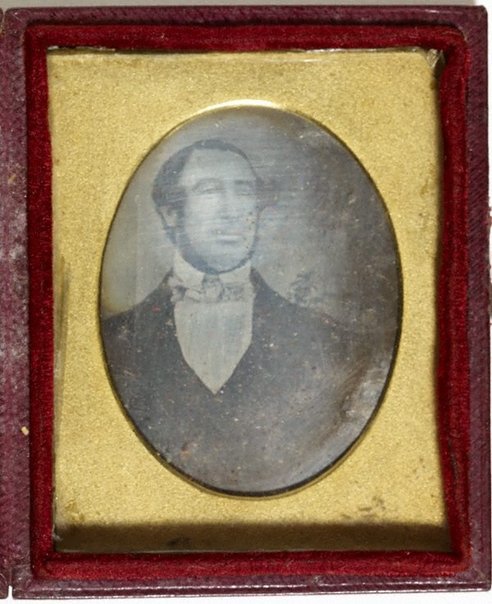 These three daguerreotypes sourced from Tasmania are amongst some of the earliest examples of photography in Australia. The unknown photographers have used the technique developed by Frenchman L-J-M Daguerre in the late 1830s, whereby a highly detailed image is formed on a sheet of copper that is thinly plated with silver. The process, which is toxic, begins with thorough cleaning of the silver plate, which is then suspended over iodine in an enclosed container so that the vapours of iodine unite with the silver to produce a light-sensitive surface. After being transferred to a camera, the plate is then exposed in bright sunlight, initially between ten and twenty-five minutes. As a consequence of long exposure times, sitters would have to lean on something for support while being photographed so as to prevent movement and therefore a blurred image.

The development process begins with the plate being placed over a dish of heated mercury, whose vapours react with the silver iodide to produce a silver mercury amalgam. The image is then fixed by immersion in a salt solution and toned with gold chloride. The result is a unique, positive print. Often the resulting portrait was then painted by hand (this is the case for [ii]) to give an apparently more realistic look to the sitter’s image, with the colours used to resemble those of ‘real life’.

Overtaking painting, drawing and silhouettes, daguerreotypes became the most popular medium for portraiture during the 1840s, particularly as techniques and equipment improved and exposure times were reduced. The cases in which the images are placed are typical of the period and were used for daguerreotypes almost universally, primarily for protection against damage. This protective device takes on other significance, however, when we consider the often decorative nature of the covers as well as the portable and personal nature of such an object once encased. There is a certain intimacy to these attractive pocket-sized containers, which potentially held the image of a loved one.

Nevertheless, by the mid 1850s daguerreotypes had largely been superseded by the cheaper and simpler ambrotype and tintype processes.

The photographs proposed for acquisition are also interesting considering Australia was late to receive and implement daguerreotype technology. The first ever daguerreotype was taken in Sydney in 1841, two years after their launch in 1839 in Europe. The earliest extant Australian daguerreotypes are from 1843. The process itself was expensive, complicated and remained state-of-the-art only very briefly. Photo historian, Geoff Barker has noted that remarkably few daguerreotypes have survived that can be linked to Australian society during the 1840s and 1850s.