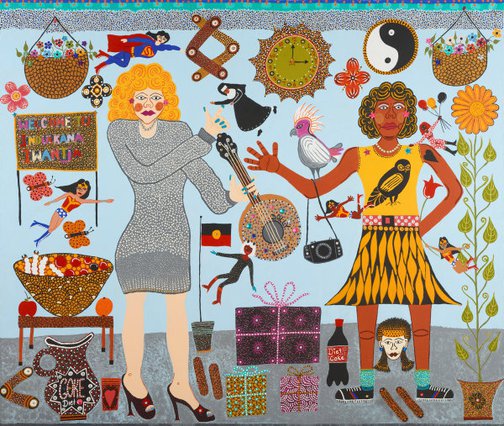 Kayleen Whiskey is a legend in the making. Her figurative works, with their pop culture references to all her favourite things, are famous for putting smiles on people's faces. Singers such as Dolly Parton, Cher, Elvis Presley, Tina Turner, and Michael Jackson make regular appearances in her works, alongside superheros such as Anangu (Aboriginal) Wonder Woman, Cat Woman and Superman. So too do junk food giants KFC and Coke partake in mythical scenarios with creation beings and Australian flora and fauna in a way that only Kayleen’s imagination could possibly dream.

‘It’s one of my dreams for Dolly to come and visit me in Indulkana,’ says Whiskey. ‘I love to listen to her music while I paint: “9 to 5”, “Coat of many colours”, “Jolene”, and my number one, “Islands in the stream,” with Kenny Rogers. I often think, “If Dolly came to visit, what would she do? What would she say? And what would she be wearing?”

‘I had a lot of fun bringing Dolly to Indulkana on the canvas. Once I had finished the painting I thought, “You know what? Dolly needs more sparkles”, so I added the plastic jewels as the finishing touch!” Kaylene Whiskey 2020

This work was a finalist in the Archibald Prize 2020 and was acquired by the Gallery in 2020.

acrylic on linen with plastic jewels

Purchased with funds provided by the Aboriginal Collection Benefactors' Group 2020