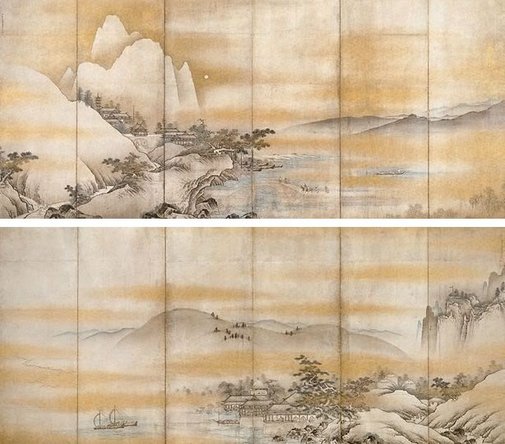 By the 1400s panoramic landscape screens in the 'suibokuga' style were an established and popular genre. The Japanese 'suibokuga' artists adopted Chinese styles, motifs, compositions and subjects but since they were unfamiliar with Chinese scenery, their landscapes often assumed an imaginary quality. Here Toeki combines the gentle rolling hills native to Japan with the soaring, ragged peaks typical of China. With its high, dense land formation either side of an expansive misty lake and use of atmospheric perspective, the composition is typical of the 'suibokuga' landscape tradition.

Toeki's screens recall earlier depictions of the popular Chinese theme of the Eight Views of the Xiao Xiang rivers (in modern Hunan province in the southern part of China). The themes had inspired many Chinese poets and painters and from the 1300s Japanese painters as well. A formula evolved where each of the Eight Views was identified by a set poetic title such as 'Returning sail off distant shore' or 'Wild geese descending to sandbar': Toeki's response to these themes form vignettes within his overall composition. His figures of gentleman scholars have also evolved from Chinese prototypes. Gentlemen scholars were an influential class in Confucian China but one that did not exist in Japan. The two figures on the left are scholars, followed by their servant who carries their zither. Other figures can be seen within the pavilions conversing and reading, activities associated with the ideal of the cultivated gentleman.