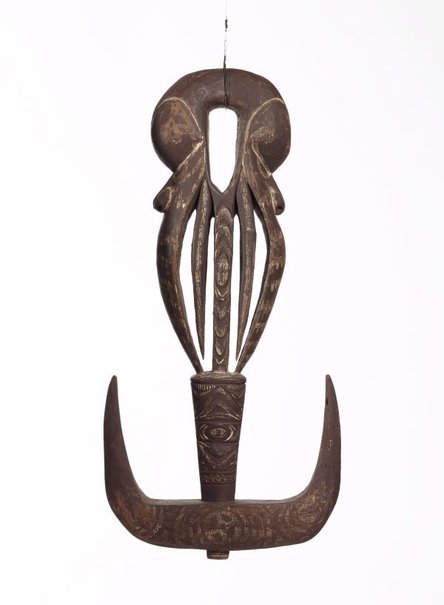 'Samban' (suspension hooks) are carved by men throughout the Sepik region and are used to suspend nets or trays filled with food, protecting contents from water and vermin. Objects such as weapons, musical instruments and ancestral human skulls or victims of headhunting were also hung on samban in the past.

Found in all dwelling houses, the most heavily decorated 'samban' held an important place in the 'geko', or men's ceremonial house. These sacred objects were thought to embody clanspecific, ancestral 'waken' spirits, which could be animated when offerings were made. Double-headed 'samban' such as this, with its elongated heads with bird-like beaks, have been likened to 'mai' masks, which appear as brother-sister pairs during Iatmul ritual performances.

© Iatmul people, under the endorsement of the Pacific Islands Museums Association's (PIMA) Code of Ethics

Browse other works by Iatmul people