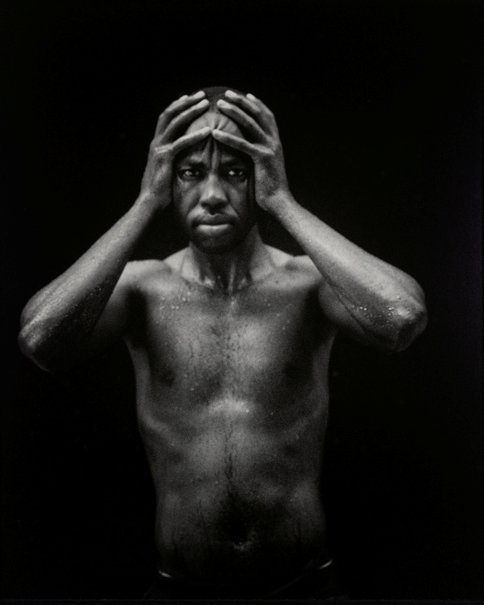 Hoda Afshar’s 2018 body of work Remain is an unflinchingly political commentary on Australia’s border protection policy and serves as testimony to its assault of human rights. Encompassing a film and a suite of photographic portraits, Remain speaks the stories of a group of stateless men who remained on Manus Island, Papua New Guinea, after the immigration detention centre closed in October 2017. In the film, their experiences are recounted as episodic fragments shot through with violence in voice overs that are by turns lyrical and brutal. Some recite poetry, some sing, some remember the riots and the suicides. As their stories unfold, the camera pans over a picturesque landscape – lush foliage and crystal-clear water. A ‘green hell’ as one man describes it. It is the abrupt collision of these two registers, the haunting narrative and the idyllic imagery, that carries the emotional force of the work. It is beautiful and horrifying at the same time.

The accompanying photographic portraits of the same protagonists are insistent and powerful. They stand before us, in the foreground of the image, against a dark backdrop. In these photographs, there is nothing to distract us from the figures themselves. Nothing to detract from the simple fact of their presence. They each assert their right to be seen. The bluntness of this gesture is itself a political act. For that is what detention does; it makes individuals invisible. In these portraits, Afshar acknowledges the plight of these men metaphorically. They are beset by the elements, by fire, water and earth. But at no point is their humanity questioned.

Browse other works by Hoda Afshar