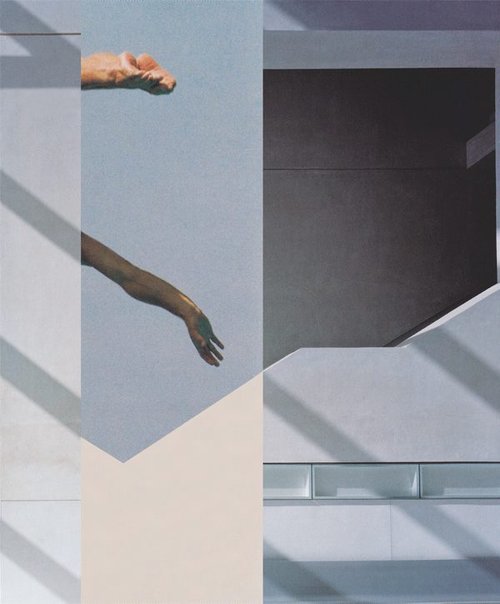 Zoë Croggon uses minimalist collage to create images that disturb conventional readings of space, perspective, architecture and the human body. Her process involves her endlessly accumulating source material, invariably printed matter from books, magazines, encyclopaedias, catalogues, tour guides, etc. The artist has said she prefers to use printed matter for its quality, which cannot be found on the low-resolution files that permeate the internet. Conversely, Croggon indicates the material basis of her sources by exposing the grids of Ben-Day dots that comprise most printed pictures and are revealed when enlarged.

Normally her compositions contain just two source images, implying a montage effect. Croggon selects one image to serve as the starting point of a work, and then begins a procedure of deduction where it is combined with others to form pairs until she comes to a conclusion. Croggon is drawn to images that are generic so that their context is indiscernible. She said in an interview: ‘if it’s an image that’s too iconic ... or too recognisable, I probably won’t want to use it. What I’m doing is interfering with the image, in combination with the other image, and it becomes a single entity which is disassociated from its referent.’1

Croggon’s works combine facets of architectural images with those of parts of bodies, often of dancers, gymnasts, or sports people. In ‘Dive #3’, limbs are disconnected through the careful cropping and placement of one image over another. An ex-dancer herself, Croggon’s inquiry into the form, lines and precision of the (trained) human body is critical to the ‘Deuce’ series.

The tension manifest in the diver’s feet and arm compliments the geometric lines of this nondescript architectural facade. Through aligning the body and inanimate structures, Croggon suggests how the body and its environment are constantly informing the other. The artist highlights how body parts and their gestures carry symbolic meanings, which can be disassociated from their ‘owner’. The body becomes a vehicle for communication, but only within the made structures that make its gestures and behaviours legible.

Browse other works by Zoë Croggon