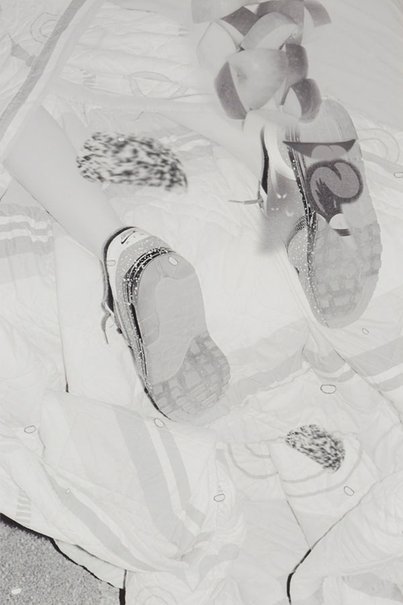 Christopher Day’s process- and collage-based work is wholly derived from images made by the artist himself. Day takes photographs of the everyday phenomena he sees around him, normally using 35mm black and white film. He processes and develops the negatives himself, then scans them, before beginning a long process of combining and recombining various elements of numerous photographs into one image. These single images can contain up to thirty negatives, or parts of negatives, which the artist may keep reworking over long periods until finally a print is made and an edition commenced.

In an interview with the NGV’s curator of photographs Maggie Finch, Day said: ‘Mostly a collage will start from a particular photograph that already represents an idea I am looking into at that time, then I start adding information to introduce an artificial language, like a documentary would, blurring fiction and reality ... The images I use are all my own photographs.’1

There are obvious references to pop culture in Day’s works, such as Nike shoes or sections of cartoon faces taken from shopfronts. However, his insistence on black and white renders the would-be bright source material strangely mute. The sense of dislocation is enhanced by the artist’s combination of disparate forms and abrupt cropping. In addition, Day is compelled by a soft grey look, preferring the mid-tones to pure blacks or whites. This method highlights the ambiguity between what is depicted in a photograph and what we come to see in it. Hence the ‘permanent deferral’, not only in Day’s slow process of arriving at final prints, but also the permanent deferral of meaning, which the artist has described as a form of escapism.

Browse other works by Christopher Day