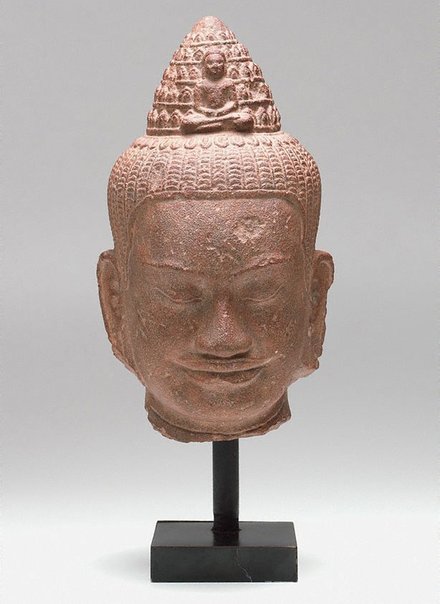 During the reign of Jayavaram VII (1181-?1218), Mahayana Buddhism became the dominant belief in the Khmer kingdom after a period of Hinduism as the state religion. Much of the art during his reign was named after the important Bayon temple. Avalokiteshvara (the bodhisattva of compassion), was one of the most important gods during this Bayon period, evidence being that images were frequently found at Angkor Thom, Banteay Chmar and Nak Pan. It was also during this time that many of the sculptures of the gods, Buddha and bodhisattvas adopted human characteristics with similarities to the image of the king himself or even his first wife, Jayarajadevi (a devout Buddhist) being depicted as Tara. Thus this sculpture is observed to have a likeness similar to portraits of King Jayavaram VII. This sculpture can generally be recognised as Avalokiteshvara by the specific identifying attribute of the figure of the Amitabha Buddha in the headdress. Further, the serenity of the face is seen to have the spiritual qualities associated with the deeply religious character of the king.