Scissor cut 1980, from the series Scarred for life II 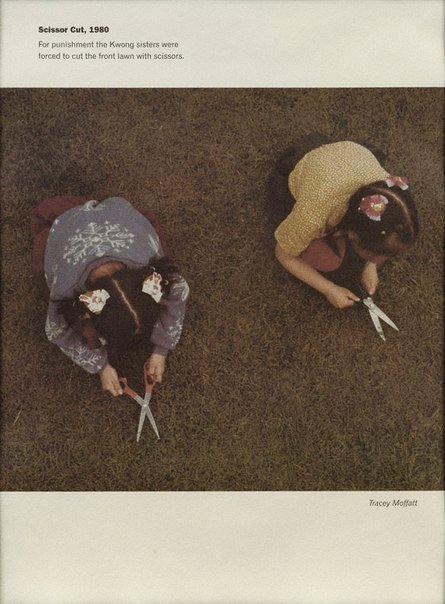 ‘Scarred for life I’ and ‘II’ are printed on thin off-white paper akin to scaled up pages from ‘Life’ magazine. The first series is of nine images, the second ten images. Originally designed to be pinned to the wall like street posters, Moffatt used photolithography (which was the most common form of printing used in newspapers and magazines in the 19th and 20th centuries) to print the works in faded colours, adding to their ephemeral effect. While ‘Life’ magazine in the 1950s and 1960s published photo-essays on major world events and presented different cultures to its primarily American audience, Moffatt takes the small yet traumatic humiliations of daily life – the sniping and jibing at difference, the feelings of inadequacy which may indeed scar us for life – and makes these stories equivalent in power.

‘Scarred for life’ is set in environments the very ordinariness of which contributes to the dramatic tension. Each suburban drama of familial slighting is at once horrifying as much as it is amusing because of its very mundanity. The viewer recognises similar events from their own past, or strange events that they have witnessed and not quite understood. Most of the tableaux take the point of view corresponding to or mirroring the wounded subject. It is this wounding and lack of resolution which then binds the viewer of the work to the viewer of the event described.

'Scissor cut 1980' is the only work in 'Scarred for life II' which is shot from above – the point of view of the parent. Here, the absolute nature of the punishment seems to far outweigh whatever the crime might have been. ‘Scarred for life I’ and ‘II ‘are unusual in Moffatt’s oeuvre because of the captions. While the words are compelling, they don’t explain the images, indeed they tend to add to their enigmatic nature as though more information is a further dead end. This works directly against the received notion of photographic captioning as necessarily directing understanding. In ‘Scarred for life’ the intricate webs of thought, action, word and image capturing the chasm of ongoing trauma are presented. Moffatt has said that this series may be a continuing project as ‘everyone has a tragic tale to tell’.1