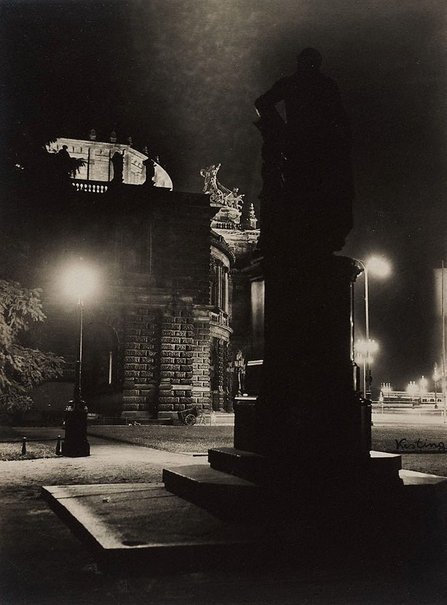 A master of the technique of double exposure, Kesting exploited the camera’s eye for new ways of seeing and experimented with large, round glass-plate formats. Spending his formative years studying painting at the Kunstakademie in Dresden, he turned to photography in 1920. At the forefront of the avant-garde movement his work was restricted by the government in 1933, but not before he became known for his dramatic and theatrical psychological portraits. He founded the art school Der Weg in Dresden after the war, connecting with the Der Sturm circle through which he furthered his experimentation with collage and photography.

In ‘Semper Opera at night’ Kesting uses framing, dramatic elongated shadows and architectural lighting to great dynamic effect. Although the image employs the formal construction of the Bauhaus, Kesting’s approach to portraiture plays an intrinsic role. That is, he employs the emotional and psychological intensity that he used in his investigations of the interior life of the sitter in highly constructed but dramatically played roles that recall film or theatre stills and evoke the night imagery of Brassaï. In fact, the image presents the architecture of the opera theatre as central to the dramatic set that he offers to the viewer – a restaging of sorts. The building, which was destroyed by fire in 1869, was reconstructed only to be destroyed by bombing in the last weeks of the Second World War. It was rebuilt in 1985 and opened with the same opera that was performed before the destruction in 1945 – Weber’s ‘Der Freishütz’. This photograph prefigures the drama of the events, aided by what writer Ann Thomas has noted as Kesting’s dextrous manipulation of light and shadow.