Hasami ware (Mitsumata kilns) was produced in the fief of Ômura, southern neighbour of Saga to which Arita belongs. Stoneware/porcelain was introduced from Arita around 1650, and the kilns specialised in celadon ware for everyday use. Those found in Southeast Asia are made in the style of Chinese Longquan ware exported in the early years of export (from mid 17th century). Their characteristics are incised geometric and stylised flower patterns, relatively thick body and light green celadon glaze. Iron solution has been applied to the unglazed part of the base resulting in reddish colouring, a Chinese practice which had been widely adopted in the Arita area. Oliver Impey writes on the possible involvement of the Dutch in the export of Japanese porcelain to Southeast Asia, particularly to Sulawesi, of 1640s and 1650s: 'Much of this porcelain was in the form of large celadon dishes, in the style of those of Zhejiang, supplied in the main by Maruo kiln, but also by Mitsunomata in Hasami and by Fudoyama near Ureshino.' ('The beginnings of the export trade in Japanese porcelain', 'The "Hakunenan" Journal of Porcelain Study', Fukagawa Seiji Co., Arita, 1989, pg.2.)

Browse other works by Hasami ware 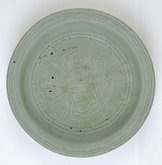 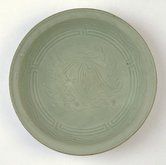