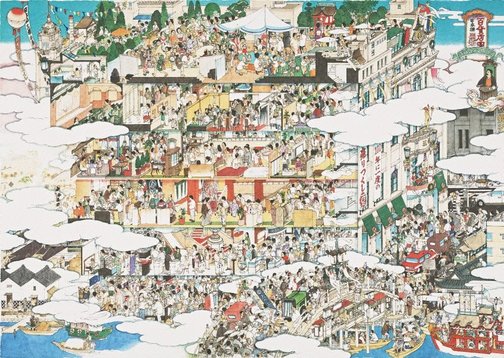 Yamaguchi Akira was born in Tokyo in 1969. In 1994 he graduated from the Tokyo National University of Fine Arts and Music, and completed a Master’s there in 1996. It is often assumed that he was trained in Japanese art, specifically ‘nihonga’ (Japanese-style paintings), but in fact he majored in Western art, which in Japan expressly meant oil painting. His training started with pen, oil and watercolours. The works on offer to the Gallery are inkjet prints from original paintings in pen, ink and watercolour.

Yamaguchi began to struggle with the ideology of Western art in his own Japanese context. It was after he saw an exhibition of ‘yamato-e’ paintings that he started to examine Japanese art for himself. He notes of his confusion at the time:

"I started to re-enact the experience of the time when oil paintings were first introduced to Japan. After being under the illusion that there was an innate Japanese quality in me, I realized that I was actually pretty empty when re-experiencing the Western stuff. And through the course of combining Japanese and Western methods, I also realized that Western painting didn’t necessarily have originality either, but had appropriated different elements. So had Japanese art, of course. I now think appropriation is a rather natural act, and such a dichotomy between the two has become a bit blurry lately."1

His work today draws quite heavily on ‘yamato-e’ paintings. Meaning ‘Japanese painting’ (as in contrast to ‘kara-e’ or ‘Chinese painting’). ‘Yamato-e’ is the native painting style developed within the courtly culture of the Heian period (794-1185) and employed to depict famous places’ (‘meisho’), scenes of the four seasons and events that are immortalised in Japanese classical poetry and literature. There are a number of techniques that Yamaguchi adopts in his works that are typical of ‘yamato-e’. The ‘rakuchū rakugai-zu’ (literally ‘scenes in and around the capital’) or ‘grand view’ approach is particularly evident in his works ‘Department store: New Nihobashi Mitsukoshi’ and ‘Tokei (Tokyo): Hiroo and Roppongi’ The paintings portray a bird’s eye view of the subject matter: the department store and the surrounding city in the former, and the overall view of the Roppongi district in the latter. The style of painting has multiple perspectives (as opposed to one point perspective as in Western art) and the building scale varies throughout. The omnipresent clouds scattered all over enable different times and spaces to co-exist on the same pictorial plane and divide the composition into smaller individual scenes on which the viewer can concentrate and become more emotionally involved in. This in contrast to when the work is viewed in its entirety which removes the intimacy with the piece.

Another technique that Yamaguchi uses in his work is the ‘blown-off roof’ (‘fukinuki-yatai’) method which dates back to the Heian period (794-1185). This is particularly evident in his work ‘Department store: Nihonbashi Mitsukoshi’, where the viewer is able to look into the internal space of the building without the roof on (or in this case also wall), as if looking from above. It allows for a voyeur’s view of what people are doing in their daily life - their shopping. Unusually in this branch of the Mitsukoshi Department store people appear to be from different historic times, evident primarily though their apparel: shoppers wearing kimono or contemporary fashion are shown side by side with samurai. The stereotyped individuals are also shopping in different eras: buying things, old or contemporary, or eating in traditional or modern styles.

Time and tense is another issue prevalent in Yamaguchi’s work. The cities that Yamaguchi depicts are what he sees as being made up of ‘the accumulated memories of people who have the power to transcend their own time’.2 Various events or meetings are depicted in his paintings, all occurring simultaneously. But is it the past, present or future that we are seeing, or do we become oblivious to time?

The issue of time is further complicated by scenes that are a mix of the reality and fantasy in that there is a dislocation of subjects and formats. For example, both works ‘Tokei (Tokyo): Hiroo and Roppongi ‘and ‘Tokei (Tokyo): Roppongi Hills’ have an element of science fiction about them in that parts of the traditional metropolis seem to have been invaded by machines, particularly in the image of the Mori Tower at the centre of ‘Tokei (Tokyo): Hiroo and Roppongi’. The notion is taken further with the mixture of architectural styles particularly in ‘Tokei (Tokyo): Roppongi Hills’ that come not only from traditional Edo Japan, but also more modern palazzo type architecture in the foreground with turrets and a fountain that has water pouring out of a lion’s head. The architectural mixture is so diverse that the complexity of the image is quite incredible.

Yamaguchi’s work is intellectually and visually complex. John T. Carpenter acknowledged that understandably Yamaguchi did not want to be categorised as a traditionalist, but sees him more as ‘an iconoclast and satirist’.3 His works have been read in numerous ways, for example as statements against rapid modernisation during Meiji up until today or as a way to look at the past to comment on the present. Either way, his works confound the viewer as well as amazes them which allows his work to have a relevance in contemporary Japan and globally.

Browse other works by YAMAGUCHI Akira