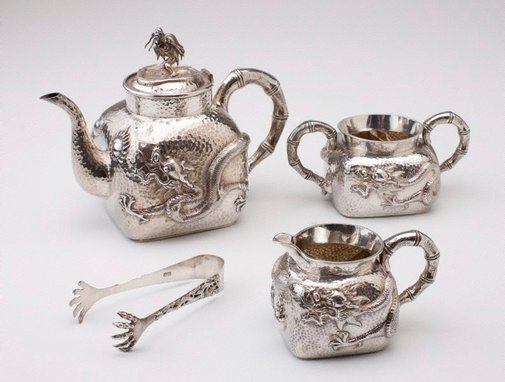 While the tongs have two carved dragons on each arm ending with five-claw scoops, the other three utensils bear five-clawed dragons chasing flaming pearls in high relief hammered out of flat sheets of silver. The lid of the teapot is decorated with a coiling dragon raising its head as a knob. The handles are in form of bamboo branches.

Jiujiang is the name of a port in the southern Chinese province of Jiangxi that the Qing court was forced to open after China’s defeat in the Second Opium War (1861). The British officers in charge had silver currency collected as custom tax made into silverware for the western market by local Chinese silversmiths, such as those at the Tu Mao Xin workshop. While the forms were dictated by Western needs and tastes, the craftsmanship, techniques, and vocabulary of design were unmistakably Chinese.