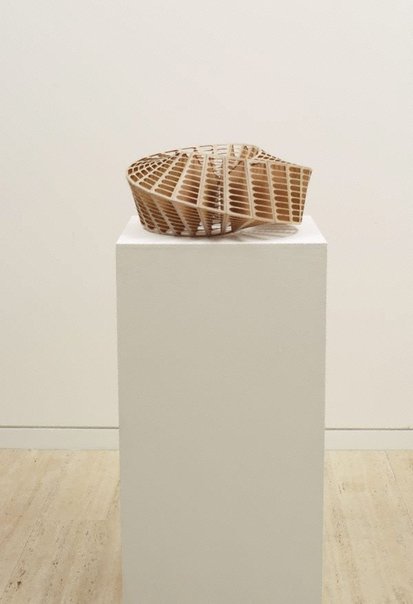 The original of ‘Palazzo della Cività Italiana’ is an imposing building located in the Esposizione Universale Roma district of Rome. This striking building is an iconic exemplar of Fascist architecture and the centrepiece of a large complex designed for the intended 1942 world exhibition. Benito Mussolini initiated this development in 1935 and the Palazzo was built between 1938 and 1943. Designed in homage to the classicism of the Colosseum, the building is also popularly known as the ‘square coliseum’.

This ideologically tainted building is inscribed on each of the facades with a text that ranks artists highly within the idea of ‘nation’ proposed by the fascists:
A nation of poets, of artists, of heroes,
Of saints, of thinkers, of scientists,
Of helmsman, of transmigrants

James Angus’s scale replica of the already geometrically exacting building has been subjected to mathematical formulae and distorted, becoming a curvilinear structure which now lies on its side and turns back in on itself. Looping around it now also seems to echo the form of a strand of DNA.

Angus has reproduced buildings, vehicles and animals in his practice. Taking these ‘found’ forms he reduces them to a schematic elemental structure which he then subjects to mathematic and structural hypotheses. ‘What if the building was distorted by this many degrees, how would it look?’ These shifts are logical and technically even achievable, but utterly disorienting when applied to familiar buildings and objects. Angus addresses the possibilities of realist sculpture within the altered rationalism made possible through computer modelling programs and digital manipulation.

Angus proposes alternate perceptual models that are inherent in geometry’s rigorous spatial logic and mathematical precision, creating wormholes in the laws of physics and optics that quite literally alter, at least in sculptural form, how we view the world. Inevitably these altered physical structures create shifts in ideology and what we may assume to be reason and logic.

Browse other works by James Angus 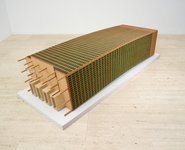