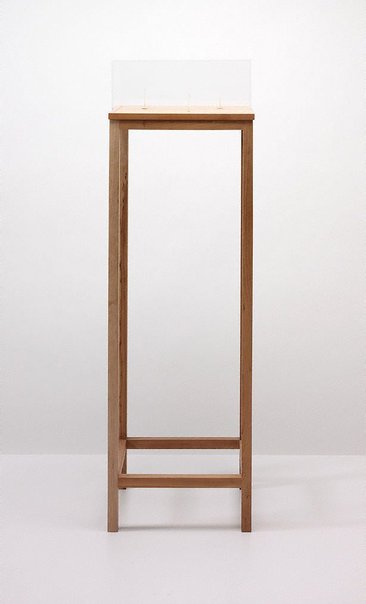 Bethan Huws’ work considers the nature of place. Using a variety of media including film, sculpture, installation, watercolour and text, Huws differentiates shifts in reality, from the memory of a place to its experience and then its reconstruction in a gallery environment. In 1991 at the Institute of Contemporary Arts in London she presented ‘Lake piece’, 24 sheets of A4 paper with handwritten text which described the conditions of a lake. Although discreet in a formal sense, the act of reading each page was potentially expansive, the text matter-of-factly recording the lake’s shape and surface, and the events that occurred while watching it (a bird passing overhead or the fact that it was raining): ‘There is another stream.’ ‘It’s been raining.’ This work is the evocation of a landscape at a particular time and place, but it is also characteristically about the experiential nature of art rather than a purely visual representation.

The small handmade boats that Huws has created since 1983 are an ongoing series which engages with similar ideas. Made from a single shaft of folded rush, they are a meditation on childhood activities and memories: sitting in the grass and making daisy chains or cautiously tearing a thick blade of grass into strips that do not break. Traditionally, the boats were made by children in the region where Huws grew up so they allude to that place, however at another juncture in time. For Huws the act of pulling the reed from its roots, carefully folding it in on itself to a stable form which can remain upright is an integral aspect of the work, more so than the outcome. As Huws has written: ‘Their significance does not lie in the fact that they are a boat form. It lies in how they were made, by whom they were made, how they relate to the place where they were made, and how that place relates to their function’.1 The formal development of these small fragile boats from a long-gone experience to present memory, and therefore from intangible to material object, and finally to a vitrine in a gallery follows a distinct trajectory and yet is, strangely, a process of devolution that is also imbued with ritual and reverie. Similar to all of Huws’ work, nothing is as minimal as it first appears. References overlap and turn back on themselves, echoing the process of twisting the shaft of reed. With eloquent and subtle precision, Huws turns her mind inward to create outward expressions that suggest places of the past and the present, in which meaning dwells somewhere between reality and experience.

Anthony Bond, Art and Australia (Vol. 36, No. 1), 'Picture Britannica: Art from Britain. Just another circus with those British brats?' review, pg. 39-41, Sydney, 1998, 41 (illus.). The illustration indicated is not a direct reference to this work of art, rather for one of the boats of a similiar work.