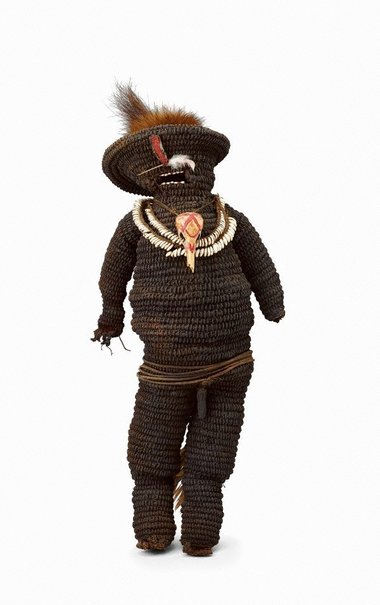 Magic formula for the yupini collected by missionary and anthropologist Fr Philip Gibbs at Porgera, 1974 (1)

According to oral tradition, the yupini basketwork figure was introduced to the Lagaip Valley of western Enga in the early 1800s. There it was integrated into the kepele ritual, a cult for all seasons of life. Ceremonies for building the kepele ritual house required a moratorium on warfare, united members of highly dispersed tribes and reaffirmed cooperation. During the kepele, boys were initiated into the secrets of ritual life and sent on their way to become men; dangerous spirits of the recently dead were banished to the realm of the ancestors; and ancestors celebrated to assure fertility. Outside of the sacred cult areas, people gathered from far and wide, renewed contacts, negotiated marriages and traded, danced and feasted to break the monotony of daily life.

The yupini stood staunchly at the centre of kepele rites, representing the legendary tribal founder who assured the production and reproduction of tribal lands and inhabitants. It provided a tangible link to the ancestors, drawing powers of the past into the present and future. In some kepele performances the yupini was made to 'dance' to the kepele house accompanied by throngs of celebrants; in others, spectators were allowed to peek through the fences around the sacred area to witness the same.

Former Councillor Amu of the Sambe tribe of Papyuka near Laiagam recalls the procession of the yupini:

The woven image (yupini) of Sambe was the point of contact with the deceased forefathers. During the rites, it was decorated like a real human with a cassowary feather headdress. Two ritual experts, one from the Malipi clan and the other from the Temanga clan, held the woven figure, supporting it so that it stood on its feet. They carried it along in the procession and made it dance to the ceremonial grounds together with the parade of participants and spectators. Its arms, ears, nose, legs, and torso were made in the image of Sambe (the tribal founder).(2)

Once in the sacred ritual house, the yupini, adorned with shells, armbands and feathers, was symbolically fed with pork fat and made to copulate with female figures while magic formulae to assure fertility were recited. Female figures were either simple vulva-shaped baskets or oddly shaped stones representing the ancestors. When ceremonies were completed, the yupini was laid to rest on a platform until the next kepele ritual was held.

Former Councillor Amu of Papyuka recognised photographs of two yupini figures in the collection of the Art Gallery of New South Wales. The smaller yupini, was from the Ipakatupa kepele site of the Yambanima tribe just above the Keta River, and the larger more detailed one from Wikimanda of the Ipane tribe also near the Keta River. To attend kepele performances near the Keta, Amu had to cross over 20 kilometres of rugged terrain and several tribal boundaries.

Male and female yupini figures were the only basketwork figures made in Enga, although they are common in Sepik societies to the north. They were made by ritual experts in some 50 different tribes in the kepele ritual network of western Enga. Kepele rites varied significantly between different tribes, as did yupini figures, even though representatives from surrounding tribes attended performances of others in the network. In some cases, renowned kepele ritual experts, as men apart, received unique burials. Their corpses were woven into a basketwork frame resembling a large, yupini-like figure, and buried in an upright position.

© Kandepe-Enga people, under the endorsement of the Pacific Islands Museums Association's (PIMA) Code of Ethics