Ema (nude on a staircase) 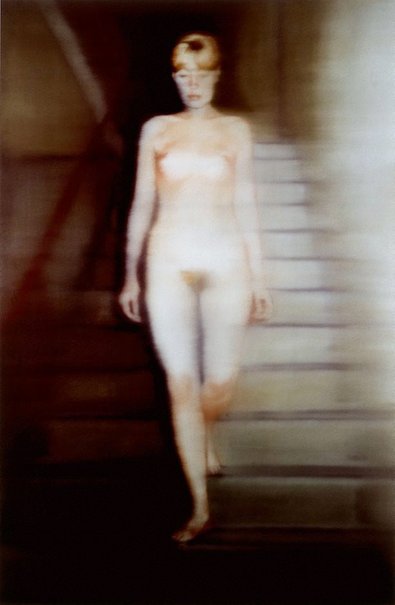 Gerhard Richter is one of Europe’s most influential post World War II painters and many contemporary artists in Australia have taken note of his work across genres as diverse as conceptual art, pop art, romantic landscape painting, realism and lyrical abstraction. Richter began painting figuratively in a European variation on pop art in the 1960s. His subject matter was often derived from newspaper photographs and mimicked the blurred effect of a black-and-white photo taken from a moving car. They also suggested political surveillance images, an idea given greater force by Richter’s professional origins in Eastern Germany. Richter has maintained a continuing dialogue with photography; in his installation ‘Atlas’ at Dia Center for the Arts in New York in 1995–96 he exhibited over 4000 photo-graphs, along with newspaper and magazine clippings. Assembled since 1962, this collection of images is a source that parallels the development of subject matter in his art.

‘Ema’, made for the 1992 Biennale of Sydney, is a photograph of a painting that Richter produced in 1966, ‘Ema (nude on a staircase)’. The photograph is the same size as the original painting of Richter’s then wife Ema, which inevitably recalls Duchamp’s famous ‘Nude descending a staircase’ of 1912. Yet compared to the machine-like movement of Duchamp’s figure, Richter’s is more sensual, even classical, with its frontal nudity and soft blurring. Richter’s painting was in turn based on a photograph he had taken of his wife. The interplay between the two media means that the large 1992 photograph appears painterly while the painting itself has the effect of a blurred photograph with light catching the body of the nude.

The source for Richter’s early abstract paintings was also photographic. However by 1994, when he painted ‘Abstract painting (812)’ (AGNSW collection), it was the materiality of paint on canvas and the effect of colours layered upon each other which dominated. This painting is from a series of works in which Richter used squeegees to apply the paint, eliminating any brushstrokes or gestural marks. While the rich, buttery yellow predominates, this has been layered over a bright green and darker reds and browns, which appear beneath the yellow to give the effect of a palimpsest, of paint layered through time. The paint has been applied both vertically and horizontally and the changes in direction add to a sense of movement. The blurred effect of scraping across the canvas has connections with the blurring in many of Richter’s more realist paintings. While some critics, such as Benjamin Buchloh, have tried to place the breadth of ways in which Richter paints and his diverse styles into an ironic and conceptual framework, Richter himself has insisted on his place in the European tradition of painting.

Browse other works by Gerhard Richter