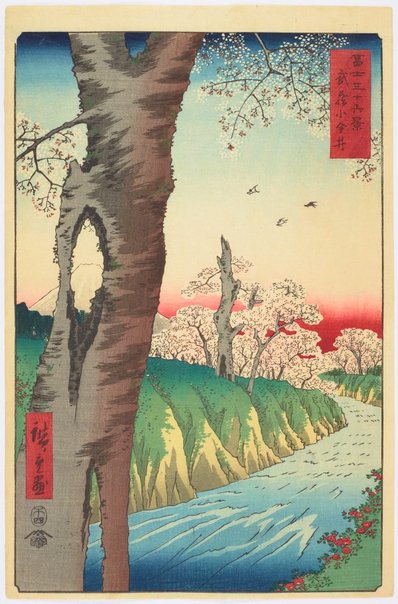 Over the period of his career, Utagawa Hiroshige is believed to have created up to 5000 designs for woodblock prints. This image is from the series 'Thirty-six views of Mount Fuji' (Fuji sanjurokkei) and was released in 1858, the year of the artist’s death. In this spring scene, Mount Fuji is presented framed by the split trunk of a blossoming cherry tree by a fast-flowing river.

Such dramatic composition is a distinctive feature of Hiroshige’s prints which were widely distributed in Japan and also popular with European artists, in particular Vincent van Gogh and Claude Monet. The series was created in collaboration with Hiroshige’s pupil Utagawa Hiroshige II (born Suzuki Chinpei, 1826–1869) and published in Edo (Tokyo) by Tsutaya Kichizō (Kōeidō)

Browse other works by Hiroshige Andô/Utagawa