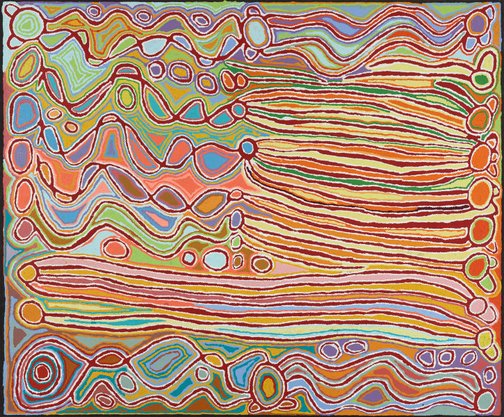 Judy Napangardi Watson is widely recognised for her brilliant use of colour and striking compositions which capture the dynamism of her Warlpiri country. In Mina Mina Jukurrpa 2012 Watson gives vivid form to her most important Jukurrpa, which was a recurring subject within her practice. The strong linear elements are reminiscent of the digging sticks that were created at Mina Mina, as well as the hair string skirts worn by women. Aligned vertically on the canvas, these elements also offer an indication of travel and reference an important journey undertaken by women of all ages from the site of Mina Mina towards to the east. This journey has connections to the snake vine and honey ant, as well as the digging sticks and hair string skirts, and is of particular importance to Napangardi and Napanangka women.

Watson spent much of her early life at Mina Mina, which is within her family’s country on the border of the Tanami and Gibson Deserts. This area is rich with bush foods including wanakiji (bush plums), yakajirri (bush tomatoes) and wardapi (sand goanna).